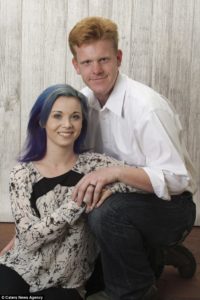 ‘We’ve had 10 lovers each since our wedding’: Polyamorous couple say their marriage works BECAUSE they sleep with other people (but they don’t let their five-year-old see their dates)

This month’s meeting will be a discussion on the topic of the Ups and Downs of Communicating in Polyamorous Relationships.

For him, polyamory is more honest and natural than monogamy.

・Laura and Mike Leonard, 28, from California, were married two years ago

・Couple, who have a son, 5, have since enjoyed relationships with ten people

・They say being polyamorous improves communication within their marriage

He’s married to my older sister.

We’re getting married next year.

A couple who have slept with 20 other people between them since getting married two years ago say their adventurous sex life is the glue that binds them.

Laura and Mike Leonard, both 28, from California, were wed in 2015 and have since pursued sexual relationships with other people – because they say one person isn’t enough to sate their desires.

Despite having a five-year-old son, full-time jobs and a mortgage, the polyamorous couple say their complicated love lives only serves to make their family home better – because they constantly communicate about who they’re sleeping with.

I’m trying to be more adventurous with my cooking.

He’s much more adventurous than his younger brother.

She led an adventurous life.

Macmillan Dictionaryによると ” a sticky substance that you use to fix things to each other “ と ” an idea, person, or thing that unites people “ 記載されています。

a pot of glue

You could stick that back together with a bit of glue.

Cambridge Dictionaryによると ” to tie something tightly or to fasten something ” と記載されていますね。

Bind together the two broken ends.

The prisoner was bound hand and foot.

Cambridge Dictionaryによると ” (used especially in newspapers) to marry someone: ” と記載されていますね。

The couple eventually wed after an 18-year engagement.

They are planning to wed in June.

We are working together to pursue a common goal.

He decided to pursue a career in television.

He wants to pursue a career in medicine.

He searched for a book that would sate his desire for all the details of Olympic history.

Nothing serves to explain the violent fighting we have seen recently.

His death serves to remind us just how dangerous using drugs can be.

In a bid to ensure that their son Ian, 5, isn’t affected by the new relationships they forge, they‘ve agreed never to bring dates home.

And they say they’re only speaking out about their marriage because they want to highlight to couples the benefits that such an open relationship can have.

Laura, a customer service adviser, says: ‘Dating is part of who I am and that’s why I’ll always be polyamorous.

‘Mike and myself got married knowing full well that we’d never be 100 per cent exclusive to each other.’

The company cut prices just before Christmas in a bid to support sales.

They have reduced the cost of borrowing in a bid to get the economy moving again.

Cambridge Dictionaryによると” to make or produce something, especially with some difficulty ” と ” to make an illegal copy of something in order to deceive “ というふうに記載されていますね。

The accident forged a close bond between the two families.

She forged a new career for herself as a singer.

He was accused of forging his father’s signature on the check.

You know full well what I am talking about.

You know full well that you’re not supposed to take the car without asking me!

Macmillan Dictionaryによると” limited to a particular person, thing, or group and not shared with others ” というふうに記載されていますね。

This special offer is exclusive to readers of this magazine.

The pool is for the exclusive use of residents of Springfield.

The road is for the exclusive use of residents.

She adds: ‘I’ve had around 10 sexual partners since we tied the knot and I tend to go on around two to four dates per month.

‘When I struggle to find dates, I used dating website What’s Your Price to find potential new partners.

‘Mike also goes on dates with other women and we openly discuss the sexual partners we have while married.’

So when are you two going to tie the knot?

If you go on (= continue behaving) like this, you won’t have any friends left at all.

We can’t go on like this any more. Things have got to change.

‘I currently have Mike, another boyfriend and a girlfriend to share my time between.

‘I try to make sure I divide my time equally but myself and Mike have adult responsibilities like our house and Ian to consider.

Mike and Laura first met in college but it wasn’t until 2011 that Laura became polyamorous and later rekindled her relationship with Mike – and asked if he would consider living the lifestyle.

‘I was open from the beginning, I didn’t want a monogamous relationship. I didn’t enjoy being exclusive to other partners, it’s great to get out the house and have fun with other people.

She says the couple haven’t looked back:

‘Mike has always supported my decision and although he doesn’t have any other partners at the moment, I have two.’

‘Being polyamorous has made our marriage stronger as we’re always communicating with one another.

‘Having sex with other people has nothing to do with us ‘being cheaters,’ we both just need more than one sexual partner to fulfil our needs.

‘That’s not to say we don’t get jealous of one another from time to time but that’s normal.’

Mike chimes in: ‘We have a great marriage and although I can get jealous of her other partners, she does her best to ensure she divides her time between us all.’

The holiday was a last chance to rekindle their love.

This journey has rekindled some old memories for me.

His interest in politics was kindled by the 1997 election.

Her imagination was kindled by the exciting stories her grandmother told her.

One day we’ll look back on this and laugh.

It wasn’t such a bad experience when I look back on it.

When I look back I can see where we went wrong.

Most people look back on their school days with fondness.

Cambridge Dictionaryによると” to satisfy someone or to make someone feel happy: ” というふうに記載されていますね。

The journey fulfilled a long-cherished dream.

I’ve finally found a job in which I can fulfil myself.

I’m looking for work that will fulfil me.

It would be unwise, not to say stupid, to leave your first job after only six months.

from time to time

I still think of him from time to time.

Macmillan Dictionaryによると” to join a conversation by saying something “というふうに記載されています。

Feel free to chime in if you’ve got something to add.

“It’s very difficult,” I said. “Impossible,” she chimed in.

Andy chimed in with his view of the situation.

George couldn’t resist chiming in with his ‘helpful hints’ about investments.

a long and happy marriage

Too many marriages end in divorce.

Laura says their relationships are very much exclusive and they don’t meet partners as a couple.

‘He doesn’t get involved in my other relationships, we have tried in the past but sexually I just seek other people on my own.

‘I have a girlfriend who has a husband and a boyfriend who I try and ensure I see as much as I can.

‘Me and Mike are happily-married and being polyamorous has only ensured we stay loyal to one another.

She says: ‘There’s a lot of people who call us cheaters or that we can’t be happy with our spouse but we are more than happy.

‘Polyamory isn’t for everyone, but I think if most people were themselves they‘d realise that one single person cannot possibly give them everything they need.’