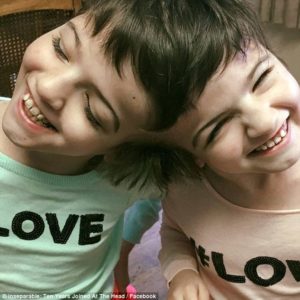 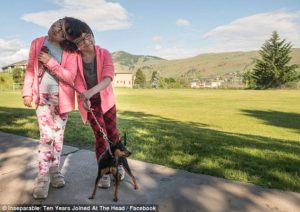 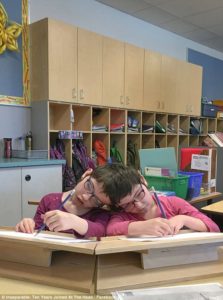 The 10-year-old conjoined twins who were only supposed to live ONE DAY: Sisters attached at the skull have defied doctors to become model school pupils – even though they see through each other’s eyes and share the same emotions

defy someone to do

I defy you to climb that cliff.

I defy you to produce one shred of evidence.

・While each controls her own limbs, both twins can control each other’s limbs

・Now, their miraculous story is being featured in new documentary, Inseparable

She rested her tired, aching limbs.

The accident victims mostly had injuries to their lower limbs (= legs).

He made a miraculous recovery from heart disease.

Well, you‘ve made a miraculous recovery since last night!

For ten years, a pair of conjoined twins who share a brain and a skull have defied their doctors’ expectations, and now their miraculous story has been featured in a new documentary.

Tatiana and Krista Hogan have brought their family so much joy and happiness as they live each day to the fullest and attend school like other Canadian children.

When Tatiana and Krista, were born, their parents, Felicia and Brendan, were warned to prepare for the worst as the children were not expected to survive the day.

But now, the twins, who live with their family in Vernon, British Columbia, have continued to defy expectations and enjoy similar lives to their classmates.

In the new documentary, Inseparable, Tatiana and Krista show the world what it’s like to share every waking moment with one another.

Cambridge Dictionaryによると ” to cause, result in, or produce a state or condition: ” と記載されていますね。

The baby has brought them great joy.

She‘s brought us so much happiness over the years.

My goal is to enjoy life to the fullest.

She certainly lives life to the full.

She knows what it’s like to go bankrupt – it happened to her 20 years ago.

I wonder what it is like to fly first class.

I wonder what it is like to become a billionaire.

Abigail spent every waking hour(moment) working on the report.

Not only do the twins see through one another’s eyes, they also share emotions and feel it when the other is tickled.

While each controls her own limbs, both twins can control each other’s legs and arms.

According to their mother Felicia, the girls adore going to school, watching Power Rangers and eating cake.

What’s more, she says, they are always happy and bring her and their father, Brendan, such joy, along with their other children Rosa, 13, Christopher, 11, and Shayleigh, seven.

‘I could have never imagined they were going to do anything that they can do now. There’s nobody in the world that‘s connected the same way that they are,’ Felicia says in the documentary that will premiere on CBC.

The Hogans were given the news that their babies were joined at the head and that their futures would be uncertain during Felicia’s pregnancy.

Cambridge Dictionaryによると” to touch someone lightly with your fingers, making them slightly uncomfortable and often making them laugh ” と記載されていますね。

I tickled her feet and she laughed.

The dog rolled over, waiting for his tummy to be tickled.

He adores going to parties.

Don’t you just adore lying in a hot bath?

Chrysanthemums are such beautiful flowers, and what’s more they are very easy to grow.

The decorations were absolutely beautiful and what’s more, the children had made them themselves.

Macmillan Dictionaryによると” if a film or play premieres, or if someone premieres a film or play, it is shown or performed for the first time “ というふうに記載されていますね。

The play was premiered in New York.

The three-part BBC program will premiere in the United States on the Discovery Channel on Sunday.

But their mother said abortion ‘was not an option’. Instead, the pair have been constantly monitored since birth – and caused marvel among doctors who area astonished over how their shared brain works.

‘We’re just going to take it one day at a time. Their birthday’s definitely that beacon of “Okay, we’ve done it again,”‘ Felicia said in the documentary.

In clips from the documentary, the twins are seen riding a specially-built bicycle, gliding down hills on toboggans and cross country skiing.

The girls are also given swimming lessons as part of their physical therapy. The twins do suffer from epilepsy and are diabetic. They take a regimen of pills, blood tests and need daily insulin injections, according to CBC.

This miniature phone is the latest technological marvel from Japan.

It’s a marvel (to me) how they’ve managed to build the tunnel so quickly.

This gadget is a technological marvel.

Cambridge Dictionaryによると” a programme of medical treatment, exercise, or special food for improving your health or appearance ” というふうに記載されていますね。

The doctors recommend that he continue his exercise regimen.

After his heart attack the doctor put him on a strict regimen.

His doctor put him on a strict regimen of exercise and low-fat food.

But while they feel the same things they also have different personalities.

‘Over the years Tatiana has become the prominent leader,’ says their mother. ‘Krista is quieter and can be more in her own shell.’

Dr Douglas Cochrane a neurosurgeon who has treated the girls as they have grown up admitted in 2015:

Their grandmother Louise McKay said they continue to defy expectations with the fulfilling lives they lead.

‘One doctor said they would be lying on their backs all their lives,’ said McKay, ‘but they have surpassed everybody’s expectations’.

The girls have learned how to run and play together but it has yet to be established whether or not they share thoughts. However, the twins say they know one another’s thoughts without having to speak.

As of September 2017, the twins go to a regular school where they have started the sixth grade.

Though academically delayed, they are learning to read, write and do arithmetic.

She plays a prominent role in the organization. ​

She is likely to play a prominent part in the presidential campaign.

She has a prominent chin/nose.

come out of your shell

Stephen needs someone who can bring him out of his shell.

Derek has really come out of his shell since he started working here.

It took Dan a few weeks to come out of his shell, but he’s doing well now.

Macmillan Dictionaryによると” to take someone into hospital for medical treatment ” というふうに記載されていますね。

After collapsing, she was rushed to hospital, where she was admitted.

She was admitted to hospital suffering from shock.

Macmillan Dictionaryによると” to surprise someone very much, especially by being very impressive ” というふうに記載されていますね。

These guys continue to amaze with their excellent music.

What amazes me is that they never get tired.

It amazes me that she’s got the energy for all those parties.

It amazes me how you can put up with living in such a dirty house.

Nursing is hard work, but it can be very fulfilling.

I hope you can find a job that’s really fulfilling.

Macmillan Dictionaryによると” to live your life in a particular way ” というふうに記載されていますね。

He had always led a quiet life until he met Emma.

He was able to lead a normal life, despite the illness.

We certainly don’t lead a life of luxury but we’re not poor either.

Emma was lying on her back in the sunshine.

to lie on your side

Our team’s achievements surpass those of teams in earlier years.

While the girls can be affectionate with each other, like any siblings, they can also squabble and Felicia said they have to work hard to ensure they get along – as they will be together for life.

‘They still have moments where they can fight and get angry and frustrated with each other and those fights can get violent.’

The girls will never be able to be separated or live independent lives because of the way their brains are connected.

‘People always ask when will they be separated but they won’t be,’ McKay said. ‘They have too much wiring going to each other for them ever to be separated.’

Felicia Hogan said the best way to describe the way their brains are linked is like a zip – there are two separate brains but the way they are fused together means they can never be disconnected.

As a result, the girls have learned how to live together and their parents don’t let the fact they are conjoined hold them back.

My best friend is thoughtful and affectionate.

They squabbled about how the money would be spent.

Polly and Susie were having a squabble about who was going to hold the dog’s lead.

Macmillan Dictionaryによると” if two substances fuse, or if you fuse them, they become joined to form one thing ” というふうに記載されていますね。

The sperm fuses with the egg.

The bones of the skull are not properly fused at birth.

Cambridge Dictionaryによると” to keep information secret from someone deliberately ” というふうに記載されていますね。

Joe held back his anger.