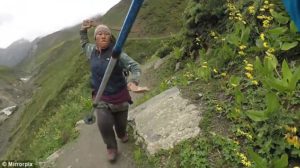 Terrified British mother films the moment a local woman chases her and her son, 15, along Nepalese mountainside while screaming ‘You donkey! You dead!’ after an argument over a cup of tea

Cambridge Dictionaryによると” from one part of a road, river, etc. to another “ と“in a line next to something long” と記載されていますね。

We walked along the beach collecting small crabs in a bucket.

They were sailing along the southern coast of Australia.

a row of houses along the river

Cars were parked all along the road.

Cambrigde Dictionaryによると” a long, narrow, flat piece of wood or similar material, of the type used for making floors: “ と記載されていますね。

a plank of wood

We used a plank to cross the ditch.

They walked across the creaky, wooden-plank floor of the old house.

I had a confrontation this morning with my boss.

There were violent confrontations between police and demonstrators.

Thirteen people were injured following violent confrontations with the police.

This is the terrifying moment a British woman and her teenage son were chased down by a furious villager while trekking in Nepal.

Gemma Wilson, 35, a trainee teacher from Barnsley, was hiking the Annapurna Circuit with stepson Charlie, 15, when the pair were attacked by a tea shop owner.

Dramatic GoPro footage shows the pair attempting to get away from the local, who is chasing them with two large planks of wood and throwing rocks at them.

I’m terrified of the dark.

She’s terrified (that) her mother might find out her secret.

I’m terrified of forgetting my lines.

Dad was furious with us.

I was late and he was furious with me.

We had a furious debate about the death penalty.

They were furious at not being invited to the party.

Cambridge Dictionaryによると” a person who lives in a village ” と記載されていますね。

Trainees will learn a skill that is valued in many countries.

We have three new trainees in the accounting department.

We watched scenes of the dramatic rescue on the news.

get away (phrasal verb)

Macmillan Dictionaryによると” to escape from a person or place ” というふうに記載されていますね。

A police officer grabbed him, but he got away.

The dog got away from me in the park.

We walked to the next beach to get away from the crowds.

I’ll get away from work as soon as I can.

Gemma can be heard begging for her life as the woman threatens them, saying she didn’t dare fight back in case she slipped off the narrow mountain path to her death.

She told The Mirror that the altercation started as the pair were around 4.5km into the 230km trek when they stopped to get a drink.

Her son ordered a black tea, but when they came to pay for the drink, the woman wanted to charge them 150 rupees instead of the typical 50.

She had to beg for money and food for her children.

He was screaming in pain and begging for anaesthetic.

We begged her for another chance.

Is your child begging you for a skateboard?

Macmillan Dictionaryによると” to tell someone that you might or you will cause them harm, especially in order to make them do something ” と記載されていますね。

The terrorists are threatening to kill the hostages.

They threatened to kill him unless he did as they asked.

Macmillan Dictionaryによると” if you dare to do something, you are not afraid to do it, even though it may be dangerous or shocking or may cause trouble for you “と記載されていますね。

I drove as fast as I dared.

I was going to ask if his dog was better, but I didn’t dare in case she had died.

Everyone in the office complains that he smells awful, but nobody dares (to) mention it to him.

Take an umbrella in case it rains.

I don’t think I’ll need any money but I’ll bring some just in case.

Bring a map in case you get lost.

According to witnesses, the altercation between the two men started inside the restaurant.

Phil got into an altercation with his partner.

While Gemma paid the bill, she said she remarked the amount was more than they were used to paying.

The pair then went outside where they tried to take a picture of the shop, which caused the owner to go into meltdown.

Gemma said: ‘She went to the door and picked up a big plank of wood and she was screaming at me. She tried to hit me with it.

‘This is quite delicious,’ she remarked to her host.

My father remarked that I looked unhappy.

She remarked (that) she’d be home late.

‘The only part she managed to hit me was my hand and I have some bruising.’

Gemma fled the village and went back to the path, but soon noticed that the woman was coming up behind them.

In the footage, she can be heard shouting to Charlie to run on ahead as she turns to face the woman before falling down.

As she pleads with the local to let her go, the woman hurls a large rock at her.

Gemma only makes it a short distance away before she is forced to stop – exhausted and out of breath after running in the high altitude.

Macmillan Dictionaryによると” an area of bruises on your body ” と記載されていますね。

He suffered bruising to his face.

His arms and back were covered in bruises.

She had a few cuts and bruises but nothing serious.

My little boy fell off his bike and has a bad bruise on his shoulder.

Cambridge Dictionaryによると” to escape by running away, especially because of danger or fear ” と記載されていますね。

She fled (from) the room in tears.

Earthquake victims have been forced to flee their homes.

Thousands of refugees had fled across the border to Albania.

The road ahead is very busy.

Rick walked on ahead of us.

The car ahead of us stopped suddenly.

I pleaded with you to stay, but you turned your back on me.

She appeared on television to plead with the kidnappers.

Macmillan Dictionaryによると” to throw something using a lot of force ” と記載されていますね。

Children were hurling snowballs at one another.

Rioters hurled chairs through the windows.

Youths hurled stones at the soldiers.

I must get some sleep – I’m exhausted.

The exhausted skiers are looking forward to a good night’s sleep.

We are currently flying at an altitude of 15,000 metres.

Mountain climbers use oxygen when they reach higher altitudes.

The Rocky Mountains are lower in altitude than the Himalayas.

Most balloons will burst at high altitude.

The woman catches up a second time, and can be heard shouting in very broken English about money and discounts.

Gemma can be heard pleading that the woman is scaring her son and asking to be allowed to leave, but to no avail.

The local woman then starts hurling a series of of insults – calling Gemma a ‘dog’, ‘donkey’ and ‘cow’ before making remarks about her hair.

In another blunt threat she tells Gemma: ‘You dead.’

During the confrontation Gemma can be seen slowly backing away to where her son is standing further up the path with another man walking a donkey.

Gemma said that it was after seeing this man that the woman started backing off, though she can still be heard shouting as Gemma and Charlie leave.

Gemma told the Mirror that she attempted to contact police in the next village, but was told the nearest station was days away. Villagers told her that the same woman had harassed several other travelers.

We left before them, but they soon caught us up again.

If you hurry, you should catch up with them at the bridge.

Macmillan Dictionaryによると” to make someone feel frightened or worried ” と記載されていますね。

I’m sorry, I didn’t mean to scare you.

We tried to persuade her not to resign, but to no avail (= did not succeed).

My attempts to improve the situation were of little/no avail.

His words of encouragement were to no avail.

The fans began hurling abuse at each other.

I wasn’t going to stand there while he hurled abuse at me!

Cambridge Dictionaryによると” saying what you think without trying to be polite or considering other people’s feelings: ” と記載されていますね。

Cambridge Dictionaryによると ” a statement that someone will be hurt or harmed, esp. if the person does not do something in particular ” と記載されていますね。

She was fired after making threats to her co-workers.

back away (phrasal verb)

Cambridge Dictionaryによると” to move backwards away from something or someone, usually because you are frightened ” と記載されていますね。

She saw that he had a gun and backed away.

The photo showed a woman backing away from a man with a gun.

back off (phrasal verb)

Cambridge Dictionaryによると” to move backwards away from someone, usually because you are frightened: ” と記載されていますね。

I saw the knife and backed off.

Everyone back off and let the doctor through.

He claimed that the police continued to harass foreign journalists.

She felt she was being harassed by the coach’s constant demands.