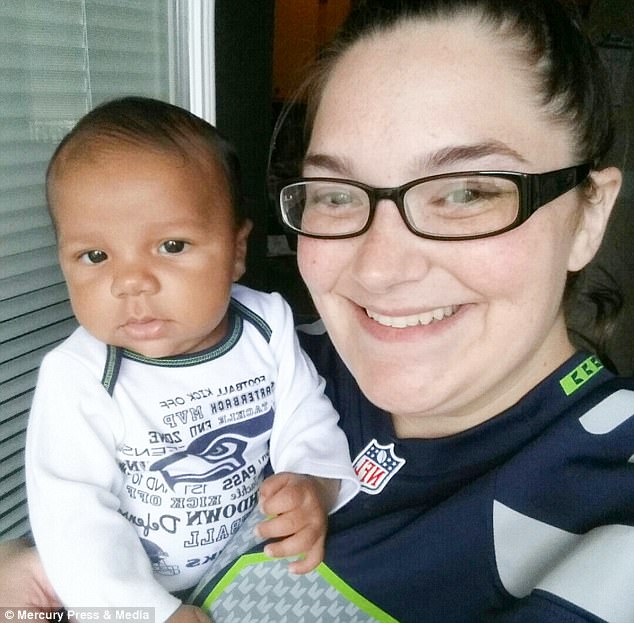 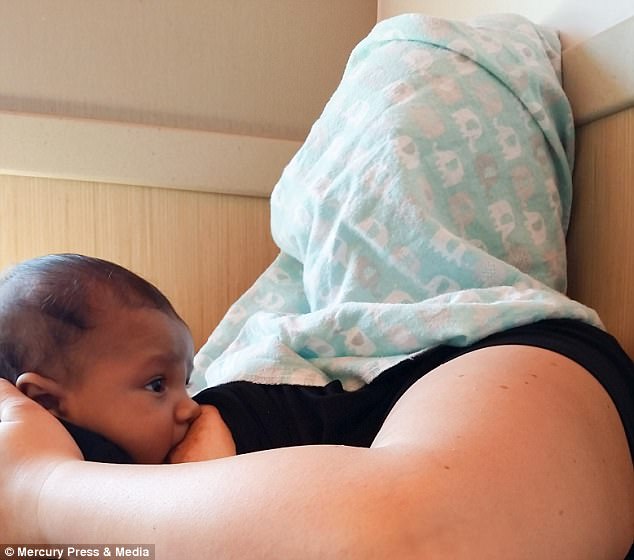 ・Nicolle Blackman, 29, was chastised by the diner for breastfeeding in public

・Blackman, from Seattle, put cloth over her face instead of her breast to riposte

・She said: ‘Why would I cover up my son? He holds his breath when he’s covered’

Dan was ogling all the women as they walked past.

I saw you ogling the woman in the red dress!

The doctor was chastised by a patient for being overweight.

Macmillan Dictionaryによると ” to reply in a quick and clever way “という風に記載されていますね。

She simply riposted that she did not create the book for the scientific community.

“What about you?” she ripostes. “Is your life perfect?”

A woman who was breastfeeding her three-month-old son has revealed how she offered a withering response to a stranger who asked her to cover up.

Mother-of-two Nicolle Blackman, from Seattle, noticed a man ‘ogling’ her chest as she tried to feed her son in a McDonald’s restaurant just south of the city.

When the man’s wife approached her and asked her to conceal what she was doing – Blackman gave a defiant put-down – by placing a muslin cloth over her face instead of her breasts.

Macmillan Dictionaryによると ” A withering look, remark, etc. is one that is intended to make someone feel ashamed: “と、” severe and extremely critical: “という風に記載されていますね。

She delivered a withering attack on the book and its authors.

The letters had been concealed under a mattress.

He made no attempt to conceal his satisfaction.

The listening device was concealed in a pen.

I tried to conceal my surprise when she told me her age.

He was in a defiant mood.

The CEO was in a defiant mood as she entered the boardroom.

Blackman visited the fast food restaurant in Federal Way, just south of Seattle, Washington, on September 2nd and sat in the corner of the restaurant to quietly feed her three-month-old son, Cameron.

The cashier, who claims she never exposed her nipple, says that she was then confronted by the angry woman who asked her to cover up because her husband was struggling to stop staring at the breastfeeding session.

However, Nicolle was so annoyed at the demand that she decided to offer her own interpretation of the request – put the cloth on her face, an act which saw the enraged stranger and her husband turn on their heels and leave.

The 29-year-old now hopes that her act of defiance will give other women the strength to feed their babies in public.

Nicolle said: ‘I was very annoyed when she said that. Why would I cover up my son? He holds his breath when he’s covered.

‘I was surprised. I think she was upset because her husband was looking. He didn’t seem to pay her any attention when she was talking.

Cambridge Dictionary によると ” an explanation or opinion of what something means: “という風に記載されていますね。

We had different interpretations of the survey results.

The Catholic interpretation of the Bible is slightly different.

It is difficult for many people to accept a literal interpretation of the Bible.

turn/spin on your heel (phrase)

After walking in on an obviously private conversation, I turned on my heel and stepped right back out of the room.

How long can you hold your breath under water?

Simon held his breath and dived under the surface.

‘I noticed he was staring. I understand people are curious and it doesn’t bother me. I’m going to feed my son regardless. His wife was really concerned but I wasn’t concerned.

‘You could only see the side of my boob so I was like ‘okay’ and covered my face. She grabbed her husband and left. My 11-year-old daughter, Kaymaii, said she looked mad.

‘I had covered myself during ‘latch’ so my nipple was never exposed. It was the first I’ve ever had someone react like this. I just wanted to bring light to the situation.

Blackman explains that Kaymaii couldn’t understand why her mother had to cover up her breasts and even took the picture of her with the cloth over her face.

‘She wanted to tell her grandmother that I wasn’t being mean to her brother and she did. My mum said that she was proud that I stood up for what I believed in.’

Nicolle says that they sat in the corner of the restaurant to be as far away from the other customers as possible but claims the couple decided to sit right next to them despite it being almost empty.

The three-month-old child had recently undergone surgery to get his lip-tie and tongue-tie [bits of skin connecting the lips to the mouth] clipped and the mum says because of this he wouldn’t take a bottle and had to be breastfed.

Nicolle said: ‘There is nothing wrong with covering up if that’s what you choose to do. Nobody knew that my son had surgery and wouldn’t take a bottle. People are judging before they know the story.’

New mothers can face a lot of issues like poor latch, low milk supply, an over-demanding baby, and breast infections.

‘I’m hoping to help other women by speaking out about it to encourage them to stand up for their children.

‘Just do whatever is best for them. If they want to cover that’s fine, if they don’t that’s fine too.

‘One time when I was feeding in a park a woman came up to me and said she would never have breastfed in public if she hadn’t seen me.

‘It was encouraging and it felt good that I could give someone the strength to do it.’