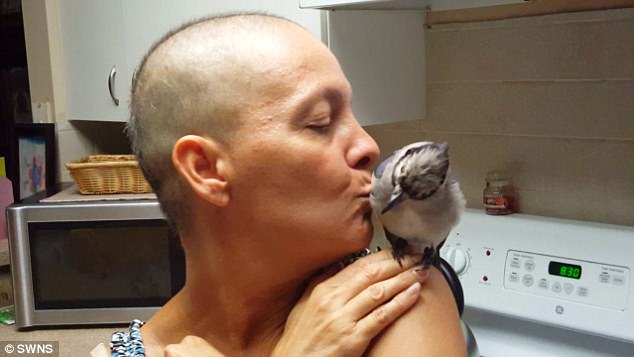 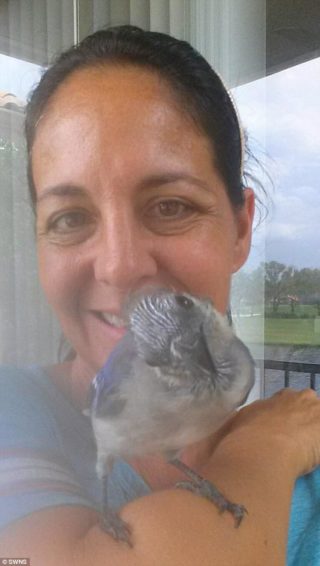 ‘She is a real-life Snow White’: Woman who saved a blue jay two years ago is visited DAILY by the bird – and says he even helped her to beat cancer

・Dina TheissEn, 47, of South Florida, discovered the chick when he was just days old, having been abandoned by his mother

・She, her daughter Alyssa and her husband Ken helped raise the bird, teaching him how to perch and forage for food before encouraging him to fly away

・He returns every day to visit the family and while Dina recently battled cancer, he frequently spent long periods of time perched next to her in bed

Cambridge Dictionaryによると” to sit on or near the edge of something: “ 記載されていますね。

A blackbird was perching on the gate.

Sophie was perched on the arm of the couch.

We perched on bar stools and had a beer.

They spend their days foraging for food around the city.

The children had been living on the streets, foraging for scraps.

A real-life Snow White is visited every day by a blue jay she saved back in 2015 – and it barely left her side as she battled cancer.

Dina TheissEn, 47, of South Florida, found tiny Gracie near a tree in her garden when he was only a few days old.

When the baby bird’s mother didn’t show up, teacher Dina, her husband Ken, 49, and their then six-year-old daughter Alyssa, took it into their home.

Macmillan Dictionaryによると” used for saying that something almost does not happen or exist, or is almost not possible ” と記載されていますね。

He was barely able to see the road in the fog.

There was barely enough room for the two of them.

The dark line of the mountains was barely visible against the night sky.

We were expecting 30 people to come, but half of them never showed up.

More examples How many people showed up to the meeting?

The family spent days doting on the chick, nursing it back to health in a towel-lined shoe box which they kept on their patio.

Dina hand-fed Gracie wet cat food every half an hour and later taught him how to perch by coaxing him onto branches balanced between plastic chairs.

She even taught him how forage for himself by leading him towards insects and encouraging him to peck at them.

After a month, when Gracie was confident enough to fly into the nearby trees, Dina and her family tried to release him into the wild – but he didn’t want to leave.

Two weeks later he plucked up the courage to fly the nest but the following day he popped back for a visit.

‘The next day Alyssa was by the pool and she said, “Mommy, there’s Gracie.” And there he was, doing his little blue jay call to us,’ said Dina.

His wife nursed him back to health.

They found an injured cat and carefully nursed it back to health (= until it was well again).

Dictionary.com によると” to feed (an animal or person) by hand ” と記載されていますね。

The students hand-fed the baby monkeys with an eyedropper.

After dinner Lily was coaxed into singing several songs.

Rescuers told how they coaxed a man out of a suicide attempt.

He has some information I want, so I’m going to try to coax it out of him over a drink.

A mother was coaxing her reluctant child into the water.

Macmillan Dictionaryによると” when a bird pecks, it moves its beak quickly forward to hit or bite something ” と記載されていますね。

The birds pecked at the insect-infested tree.

The birds learn to peck holes in the milk bottle tops.

Chickens pecked at the seeds which covered the ground.

He finally plucked up the courage to speak to her.

He finally plucked up courage to ask her to marry him.

I’d love to do a parachute jump, but I can’t pluck up the/enough courage.

I’ve just got to pop into the bank to get some money.

Paula popped out for a minute.

Would you pop upstairs and see if Grandad is okay?

Why don’t you pop in/over and see us this afternoon?

He kept popping in and out, asking all kinds of questions.

Dina’s husband Ken says the mom-of-one is like a ‘real-life Snow White’ because like the fairytale princess she loves animals – and they love her.

Dina added: ‘An unbreakable bond was developed through the endless hours Gracie and I spent together.

‘It was a huge commitment for the whole family – he needed to be fed every half an hour and we pretty much taught him how to be a bird.

‘Between us, Ken and I would be running home from work to check on him and my daughter used to play at the park after school, but all that changed. I became his mommy in every single way.

‘Sometimes he will want to play. He picks up anything shiny and flies off with Alyssa’s crayons.

The blackbird flew back and forth to its brood.

Cambridge Dictionaryによると” a close and lasting relationship between people ” と記載されていますね。

The bond between parents and children is usually very strong.

the bond(s) of friendship/love

There has been a close bond between them ever since she saved him from drowning.

Cambridge Dictionaryによると” a willingness to give your time and energy to something that you believe in, or a promise or firm decision to do something ” と記載されていますね。

We’ve made a commitment to help, and we will.

Players must make a commitment to play for a full season.

‘Other times he will just perch on the lamp and chirp away.

‘He even made his own nest on top of the fridge.’

Incredibly, when Dina was diagnosed with ovarian cancer in January 2016, Gracie began spending even more time in the family home.

When she underwent chemotherapy and surgery, the caring bird perched on her shoulder and visited for longer periods of time.

Dina, who is now in remission, said: ‘When I was battling cancer and couldn’t get my head off the pillow, he would fly in and perch next to me and talk to me.

‘He started staying for longer and ending up bringing happiness to a situation where there was nothing to be happy about.

Chemotherapy is often used in the treatment of cancer.

Her sister’s cancer is in remission.

Her cancer has been in remission for several years.

‘Having Gracie there reminded me how brave he was going into the world and made me have courage.

‘For Alyssa, when Gracie came in and would play or sit with her, she wasn’t thinking about what was wrong with her mom.

‘The experience of going through cancer for our family would have been completely different without Gracie.’

Dina added: ‘I never thought I would have this sort of bond with a bird, let alone a blue jay. He is the sweetest, most kind little bird in the whole world. He came at a time when we needed him and he has totally changed our lives.’

More than two years after he was rescued in May 2015, Gracie – who lives in a tree nearby the family’s garden – still comes to visit every single day.

We can’t really imagine what they’re going through.

A typical visit could last ten minutes or two minutes, but he will often come 15 times a day, Ken said.

The father, who is a former WWE developmental wrestler, added: ‘When Dina was diagnosed with cancer, there were tears and anger, but Gracie came and replaced all that with joy.

‘From the moment he was there all that went away.

from the moment he was there で、彼がきた瞬間からです。

‘Watching Dina with him on her shoulder, chirping away – he would stay for ten, 20 minutes at a time. It was unbelievable. Their bond is amazing.’

He added: ‘When I first met her 24 years ago, my dad said to me that she reminded him of Snow White. He said he could imagine all the little animals around her.

‘She is a real-life Snow White.’

Cambridge Dictionaryによると” relating to the process of growing or changing into a more advanced, larger, or stronger form “ 記載されていますね。

Macmillan Dictionaryによると” to get rid of someone or something, and to put a new person or thing in their place “ 記載されていますね。

The factory replaced most of its workers with robots.

Doctors have replaced the top of his hip bone with a metal sphere.