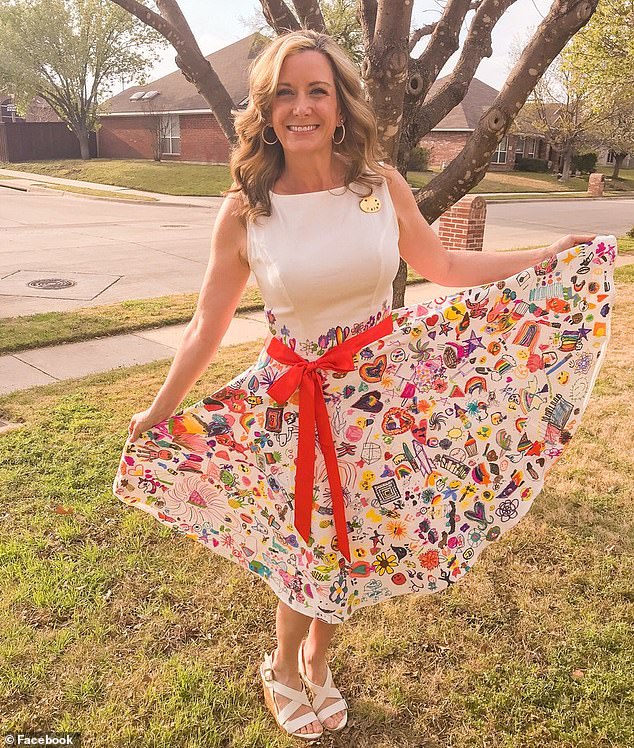 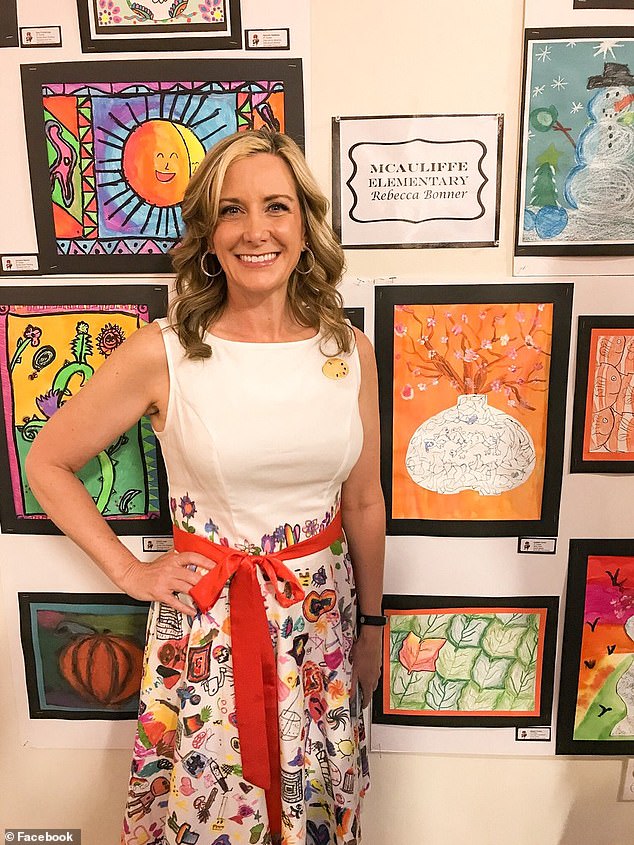 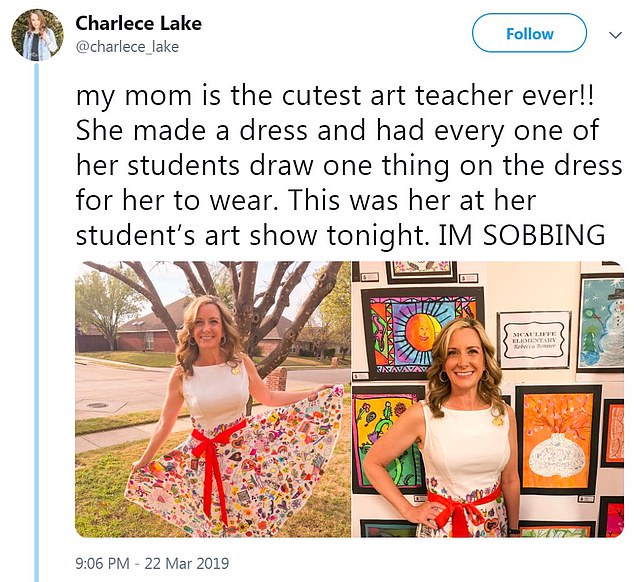 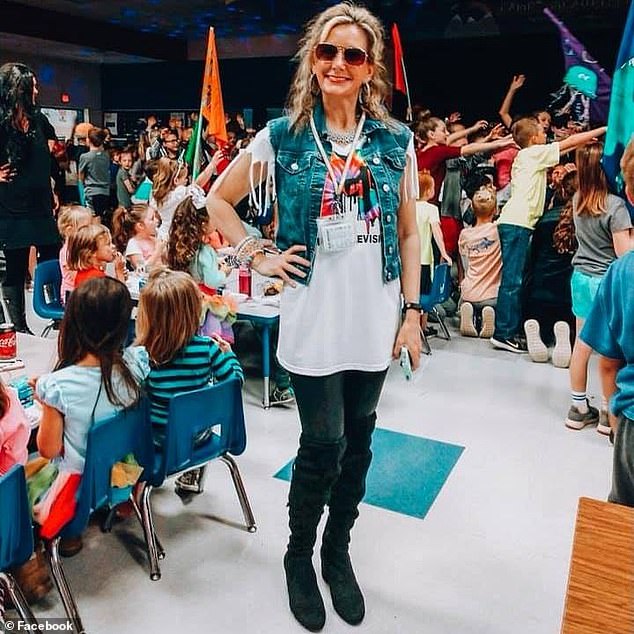 Wearing their works of art! Elementary school art teacher is dubbed a ‘national treasure‘ after photos of her modeling a dress covered in her students’ DRAWINGS go viral

・For her latest project, she had her 580 students, who range in age from three to 11, draw on the skirt of a cream dress she got on Amazon

・The teacher’s daughter Charlece Lake, 20, took to Twitter on Friday to share photos of her mother wearing the colorful frock featuring her students’ artwork

・The viral post has received more than 100,000 likes, and many fans praised Rebecca for being such a wonderful teacher

Macmillan Dictionaryによると ” to be all over a surface or object “という風に記載されていますね。

His clothes were covered in mud.

All the furniture was covered with dust.

The bandages were covered with/in blood.

Cambridge Dictionaryによると ” to give something or someone a particular name, especially describing what you think of it, him, or her: “という風に記載されていますね。

She was dubbed by the newspapers “the Angel of Death”.

The press have dubbed her ‘the Quiet Princess’.

The castle was dubbed the ‘pink palace’.

a little girl in a pretty frock

A Texas teacher has captured the hearts of thousands after proudly wearing a dress that featured hundreds of her students’ drawings.

Rebecca Bonner, a 46-year-old art teacher at Mcauliffe Elementary School in Highland Village, became an online star when her daughter Charlece Lake, 20, took to Twitter to share photos of her modeling the colorful frock.

‘My mom is the cutest art teacher ever!’ the proud daughter wrote. ‘She made a dress and had every one of her students draw one thing on the dress for her to wear. This was her at her student’s art show tonight. I’M SOBBING.’

I could hear her sobbing.

‘What can be worse than this?’ she sobbed.

I found her sobbing in the bedroom because she’d broken her favourite doll.

The cream dress, which the mom got on Amazon, features colorful drawings of all shapes and sizes on the skirt.

In the first photo, Rebecca can be standing in the front yard while holding up the skirt of the A-line dress to put her students’ works of art on display.

The second snapshot shows the teacher smiling brightly while wearing the dress at her students’ art show.

Rebecca, who has her own McAuliffe Art Room Twitter account, was thrilled that her daughter, a student at Ouachita Baptist University, was home from college and able to attend the show with her.

Her work is on display at the gallery.

The costumes were placed on display at the museum.

Paintings and carvings of birds and animals will be on display in the main ballroom of the hotel.

‘Best night ever! I love displaying all the artwork for the District Art Show and having my daughter home from college and attend the show was the BEST!’ she tweeted.

Charlece’s photos of her mom have gone viral and received more than 100,000 likes since Friday. Many fans took to the comments section of the post to praise Rebecca for being such a wonderful teacher.

‘That’s so inspiring!’ one person commented. ‘Like you can tell she loves what she’s doing and cares about her students! Wow!’

‘Your mom is a national treasure and must be protected at all costs,’ another person tweeted. ‘My art teacher is why I fell in love with the arts. Your mom is doing wonderful, I hope she knows how amazing she truly is.’

at all costs / at any cost (phrase)

Macmillan Dictionaryによると ” used for saying that something must be done, however difficult it is or however much damage it causes “という風に記載されていますね。

She was determined to win at any cost.

We realized we had to fight the lawsuit at any cost.

Someone else added: ‘Your mom is the type of teacher that changes a child’s life & they NEVER forget the positive that was poured into them.’

When one fan asked when teachers will start getting paid ‘what they deserve,’ Rebecca opened up about her love of teaching.

Rebecca told Good Morning America that she got the inspiration for the project from a private Facebook group for elementary school art teachers.

She has 580 students, who range in age from three to 11, and she felt having them decorate her dress was a great way to get them ‘excited about art.’

Macmillan Dictionaryによると ” to give a lot of effort, money, or help to someone or something “という風に記載されていますね。

They’ve already poured a lot of time and money into this project.

Most of the money raised by the new taxes will be poured into the arena project.

I put a lot of work into the speech.

If I put in some extra hours today, I can have some time off tomorrow.

We‘ve put a lot of time into redesigning the packaging.

Cambridge Dictionaryによると ” to start to talk more about yourself and your feelings: “という風に記載されていますね。

I felt I couldn’t open up to anybody.

It’s taken a few months, but Katy is finally starting to open up to me.

I’ve never opened up to anyone like I do to you.

The teacher said she laid the dress out for two weeks and just let her students doodle on it using the fabric markers and sharpies she got.

Rebecca, who said her catchphrase is ‘turn your mess up into a dress up,’ was admittedly surprised to find out that photos of her dress went viral after her daughter shared pictures of her wearing it.

‘I’m not worried about being famous or anything like that but I do think it’s great to promote the arts, because elementary art is not everywhere,’ she said.

Rebecca’s passion for teaching has inspired her own daughter to become a teacher as well, and she is currently pursuing a degree in education.

‘I think she just inspires students to be creative and just make their mistakes into something beautiful,’ Charlece told GMA.

Cambridge Dictionaryによると ” to wave something, especially wings when or as if flying: “という風に記載されていますね。

A small bird flapped its wings furiously and flew off.

Flags flapped in the breeze above their tents.

‘I worked at The Rhino Orphanage for three years but I left last year to study veterinary medicine.

‘I miss the rhinos a lot so I visit as often as I can. I was not there for Ray’s rescue but I spent time with him when I would visit and his charming personality will make anyone fall in love with him!’

According to its website, The Rhino Orphanage cares for orphaned and injured baby rhinos to make them fit enough to be released back into the wild.

The not-for-profit hits out at poaching – fuelled by the illegal trade in rhino horn – which has made the species ‘critically endangered’.

It claims that at the turn of the 19th Century there were one million rhinos but this number had tumbled to just 70,000 by the 1970s and now the creatures face a battle against extinction.

Camnbridge Dictionaryによると ” to arrange in a pattern or design; to plan something by showing how its parts fit together: “という風に記載されていますね。

The designer laid out the book with pictures on every page.

The brochure is beautifully laid out and illustrated.

The city was laid out with the town hall on a hill in its centre.

She‘d doodled all over her textbooks.

He made a real mess-up of the sales figures.

There has been a mess-up in the timetable.

Cambridge Dictionaryによると ” used when you are agreeing that something is true, especially unwillingly: “という風に記載されていますね。

Admittedly, I could have tried harder but I still don’t think all this criticism is fair.

Well, admittedly, I am no expert on art, but I think that is awful!

Writing poetry was his only form of emotional outlet.

I made the leftover meat into a pie.

I made the silk into a dress.

The old buildings were made into classrooms.

They’ve made the spare room into an office.

His first record made him into a star.

The story was made into a film two years ago.