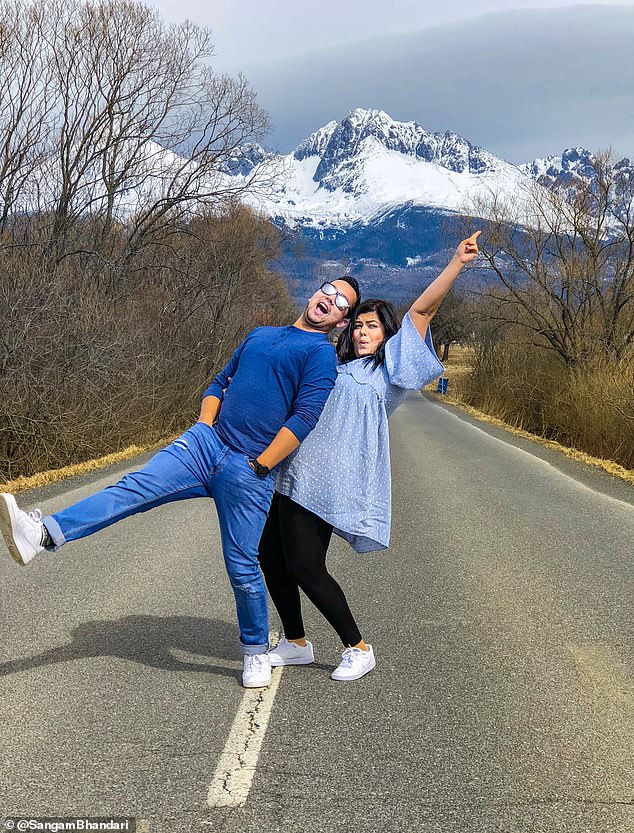 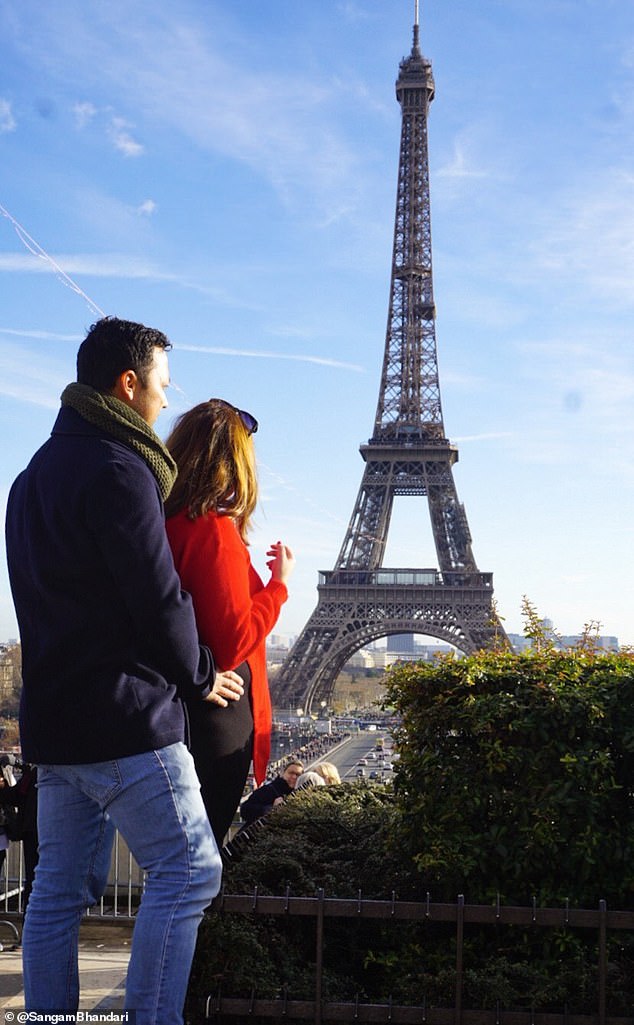 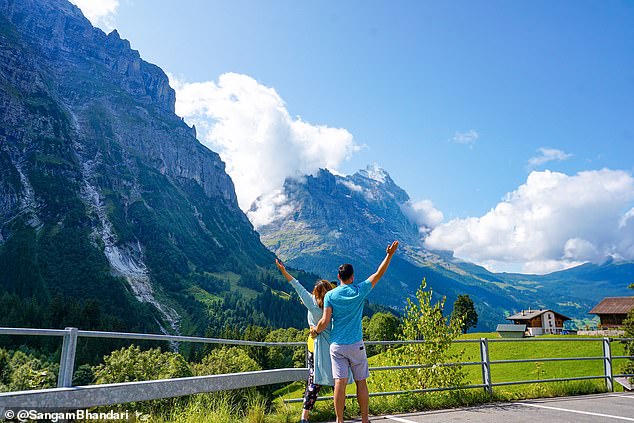 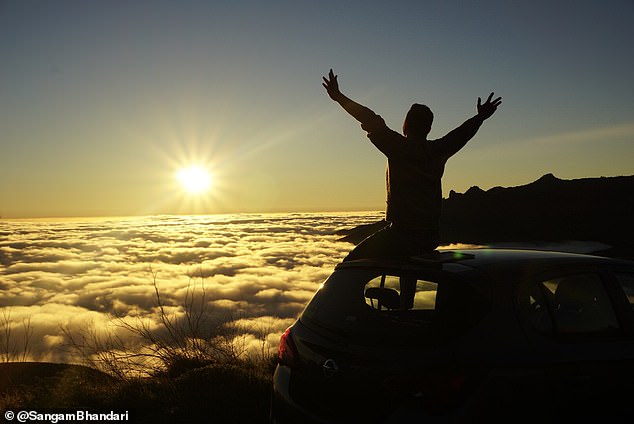 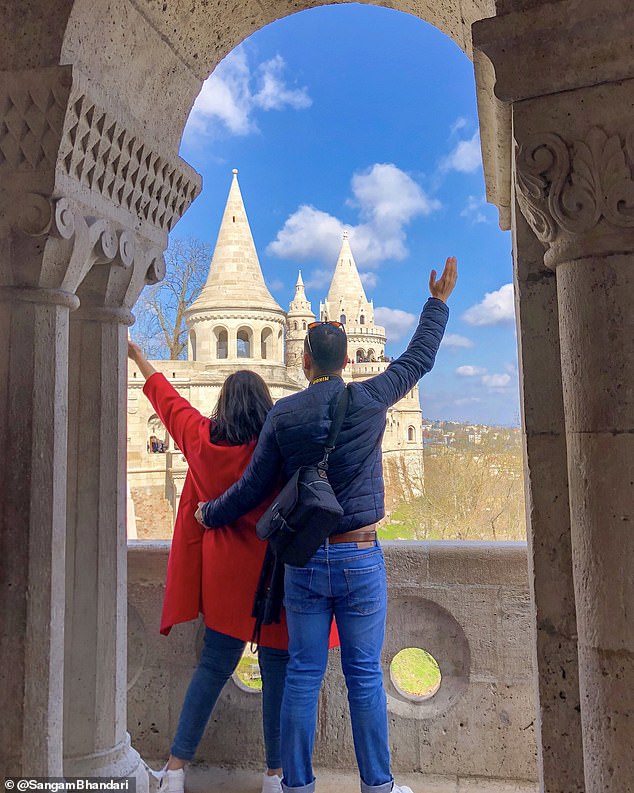 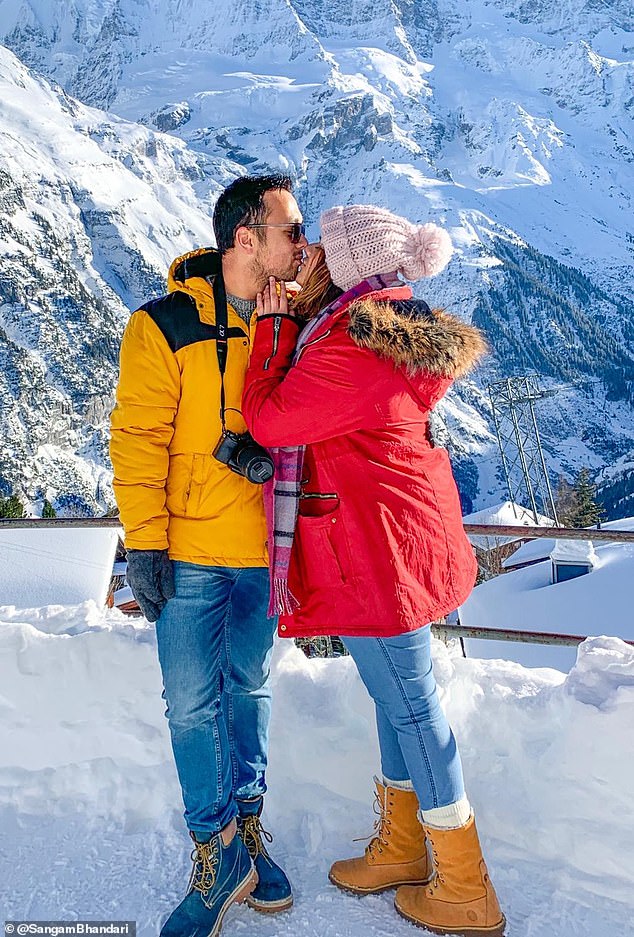 ・EXCLUSIVE: Sangam Bhandari and Shikha Neupane, 28, from Dartford work 9-5 jobs in IT

・They have been to everywhere from Spain, Switzerland and Germany to Bali

・If flights are cheaper, they travel Thursday night and work from hotel on Friday

・Spent £100 each for a weekend in Barcelona – including flights, food and hotel

Half of them have never held down a proper job.

He couldn’t hold down a job for more than a few months at a time.

She had three children, and still managed to hold down a full-time job.

A husband and wife who have nine-to-five jobs in IT have travelled to over 40 countries in two years – and insist their jet-setting lifestyle is achievable for anyone.

Sangam Bhandari and his wife Shikha Neupane, both 28, from Dartford, Kent each earn around £50K a year and have a mortgage to pay, but jet off to another country almost every single weekend at a cost of £1,500 a month.

Shikha who works for Transport For London, and Sangam who has a job at an IT consultancy company, have explored over 40 countries in the past two years alone, and say you can do the same too – even if you’re on a budget.

Sangam says the key to enjoying frequent travel is to plan ahead to get the best deals; cut back on luxuries such as the latest phones, and keep an eye on what you’re spending during the working week.

‘Add the cost of breakfast, coffee, snacks, some after-work dinner and drinks, it can quickly add up,’ he said.

‘If you plan well in advance some of the European destinations can be explored for a weekend for less than £200 for two,’ he said.

The IT professionals, work 9am-5pm during weekdays but sometimes jet off on a Thursday evening to take advantage of cheaper flights and then work remotely from their hotel room on the Friday.

Cambridge dictionaryによると ” travelling around the world a lot by plane, usually for pleasure: “ という風に記載されていますね。

She is known for her glamorous, jet-setting life.

He was a rich and powerful publisher with a jet-setting lifestyle.

Cambridge Dictionaryによると ” An achievable task, ambition, etc. is one that is possible to achieve: “というふうに記載されていますね。

Before you set your targets, make sure that they are achievable.

Macmillan Dictionaryによると ” a legal agreement in which you borrow money from a bank in order to buy a house. You pay back your mortgage by making monthly payments “という風に記載されていますね。

On my present salary I can’t get a mortgage.

Do you have a mortgage on your house?

They will be jetting off to Spain this weekend.

Macmillan Dictionaryによると ” pending only as much money as you have “というふうに記載されていますね。

So far the project is more or less on budget.

The film is already way over budget.

Macmillan Dictionaryによると ” to reduce the amount of something, especially money that you spend “という風に記載されていますね。

It’s time we cut back a little.

plans to cut back investment in education

We’re trying to cut back on the amount we spend on food.

The government has announced plans to cut back on defence spending by 10 percent next year.

‘While travelling is certainly not cheap, there are tricks and trips for reducing the cost,’ said Sangam. ‘A big part of it is planning and organisation.

‘Another important consideration is living like a local and avoiding expensive tourist traps. Using cards with no foreign exchange fee on purchase and withdrawals certainly helps.’

One of the cheapest weekends they’ve had to date was a trip to Barcelona – which cost £100 for the flights, hotel and food.

‘Weekend destinations are cheapest,’ explained Sangam. ‘The key is booking in advance. Shikha has booked all of our trips up until June 2019. We haven’t got any weekends free at all.’

After some consideration, we’ve decided to sell the house.

The whole matter needs (to be given) careful consideration.

Cambridge dictionaryによると ” a crowded place that provides entertainment and things to buy for tourists, often at high prices “ という風に記載されていますね。

What is six plus four?

a long-haul flight from London to Hong Kong

They also manage to save money on flights by occasionally jetting off on a Thursday after work, as they‘re lucky enough to have flexibility in their jobs.

‘If there’s a cheaper flight or hotel we will travel on Thursdays and then work from our hotel,’ Sangam said.

‘That’s one of the greatest things about being in a flexible workplace. If you’ve got a laptop and internet connection you can work from anywhere in the world.’

But for those whose careers don’t offer such luxuries as flexible working, the keen traveller insists not all is lost.

‘For 90 percent of our trips, we fly Friday evening after work from a London airport,’ explained Sangam. ‘Then we come back Sunday evening or even Monday morning and go directly to work.

‘It can definitely be done. It’s not easy and you get tired, but if that passion keeps fuelling you, anything is possible.’

The travel bloggers, who are originally from Nepal, started sharing their adventures on their Instagram accounts @fourhappyfeet back in December 2016 and since then they have amassed almost 40,000 followers.

They have even been named among the top five Asian couple travel bloggers in 2018.

We go to the theatre only very occasionally (=not often).

I see him occasionally in town.

Occasionally I’ll have a piece of chocolate, but it’s very rare.

Cambridge Dictionaryによると ” the ability to change or be changed easily according to the situation:e “というふうに記載されていますね。

The advantage of this system is its flexibility.

The schedule doesn’t allow much flexibility.

A more flexible approach to childcare arrangements is needed.

My schedule is flexible – I could arrange to meet with you any day next week.

I’m fortunate because my job has flexible hours, and I can come and go pretty much as I want.

Cambridge Dictionaryによると ” something expensive that is pleasant to have but is not necessary: “という風に記載されていますね。

luxuries, such as champagne and chocolate

I like to buy myself little luxuries from time to time.

Cambridge dictionaryによると ” Something that fuels a feeling or a type of behaviour increases it or makes it stronger: “ という風に記載されていますね。

Her ambition was fuelled by her older sister’s achievements.

People’s fear of crime is fuelled by sensationalist reports.

She has amassed a huge fortune from her novels.

By the time he was 40, he had amassed a fortune.

They had amassed a fortune worth about £51 billion in today’s money.

But travelling hasn’t always been a normal way of life for the pair who have been together for nine years.

‘Being from Nepal and not coming from an affluent family, my parents didn’t have the resources to take me on holidays,‘ explained Sangam.

‘I’d only been to Australia once and hadn’t travelled anywhere else at all. Our first trip together was two years ago to the Czech Republic in Prague and it was amazing.’

The keen Instagrammers emphasise the importance of managing your finances – and say that some sacrifices need to be paid if you wish to replicate a lifestyle like theirs.

‘We’re fortunate we have jobs that pay us sort of well,’ said the experienced traveller. ‘But you must prioritise. We don’t go to fancy restaurants or on dinner dates very often, as we do that when we travel.

‘We like to see new things and that’s our dinner date. We have cut out a few things like technology and the need to have the latest Iphone.’

He added: ‘We also pay for some of the hotels we stay in using our credit card points. Planning in advance can save you a lot of money. It can be cheaper than your commute to work.’

In addition to their weekends away, they also take several long-haul holidays each year.

‘We go on three of four long-haul holidays but most of them are us utilising the holidays we get from work. We also centre it around bank holidays to make it longer,’ explained Sangam. ‘In February we’re going to the Philippines and the Maldives, which have been the top destinations on our bucket list for a long time. We’re really excited.’

Cambridge Dictionaryによると ” having a lot of money or owning a lot of things: “という風に記載されていますね。

an affluent area of Edinburgh

Other scientists have been unable to replicate his results.

Researchers tried many times to replicate the original experiment.

Cambridge Dictionaryによると ” to arrange in order of importance so that you can deal with the most important things before the others: “というふうに記載されていますね。

You have to prioritize in this job because you can’t do everything.

We need to learn to prioritize.

You must learn to prioritize your work.

This room is mainly utilized for training purposes.

What criteria do you utilize in selecting employees?

The library’s great collection allowed me to utilize many rare sources.

Cambridge dictionaryによると ” to put something in the middle of an area: “ という風に記載されていますね。

Centre (= put at equal distances from the left and right sides of the page) all the headings in this document.

Cambridge Dictionaryによると ” a list of the things that a person would like to do or achieve before they die: “というふうに記載されていますね。

I have so many things on my bucket list yet to do.

Antarctica is one of the few places on my bucket list.

He added: ‘We’re also planning to go back to Nepal in October as my parents are still back home, and Shikha really wants to go to Bora Bora. Tanzania and Japan are also on my bucket list.’

The couple are so passionate about travelling they spend hours replying to the hundreds of messages they receive on their Instagram account – with the majority of people keen to know how they can live a similar lifestyle.

‘Our advice to anyone is follow your dreams and passions,’ said Sangam. ‘It’s not an easy lifestyle. We spend hours planning and organising things on social media responding to comments and messages, but it just makes us really happy.’

Joe is passionate about baseball (= he likes it very much).

She was passionate about flying.