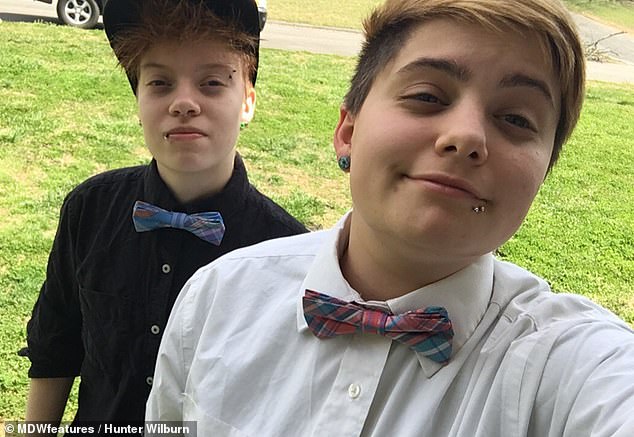 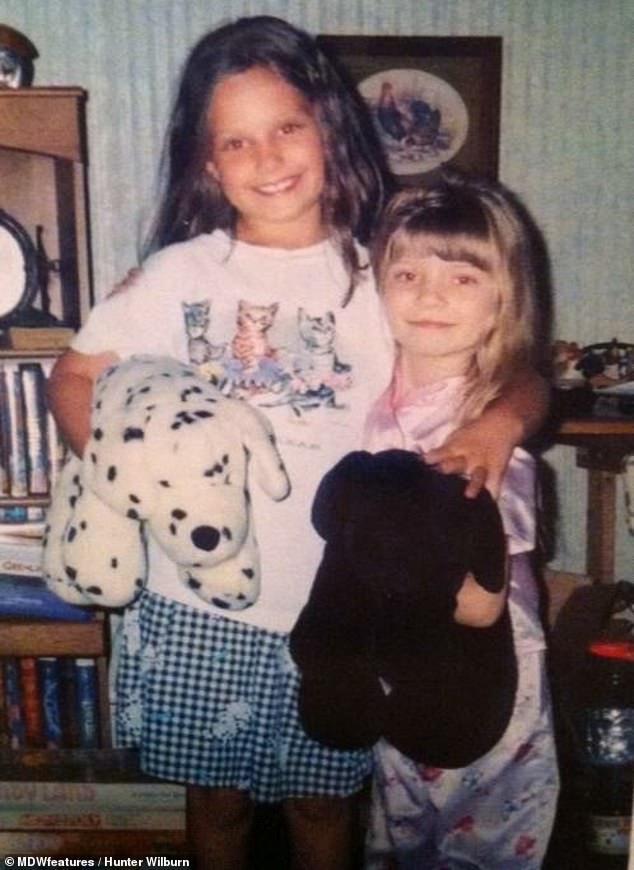 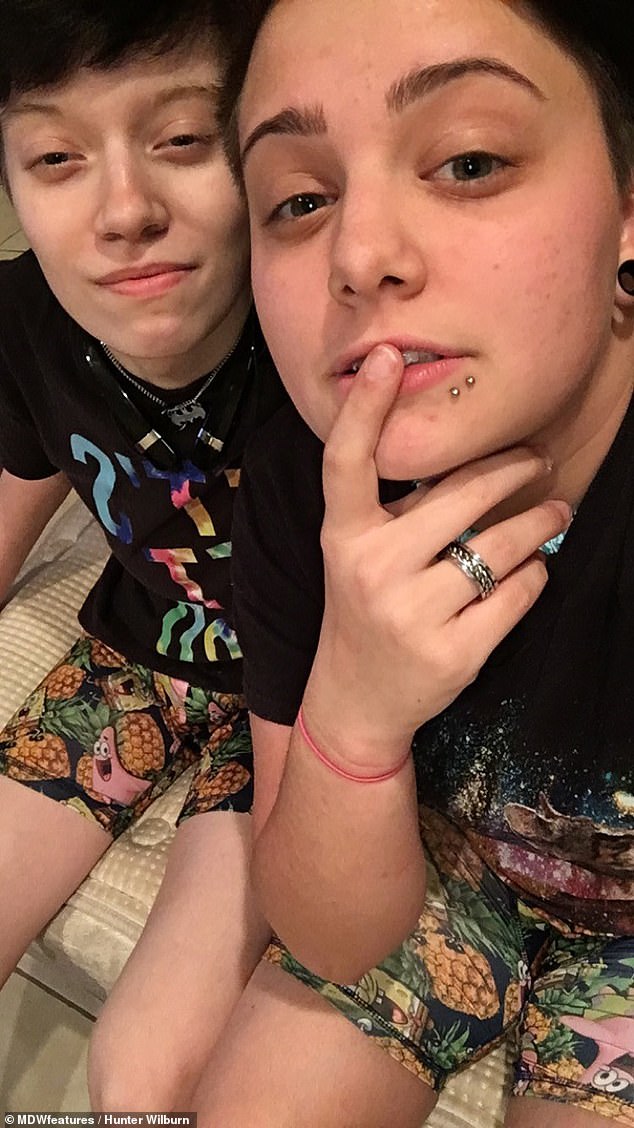 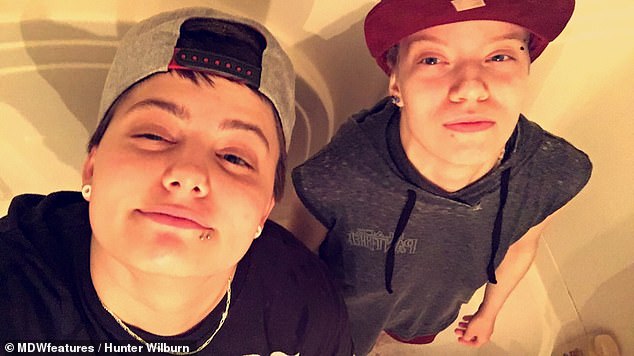 ‘We are human and we have feelings’: Transgender brothers from Georgia reveal their heartache at being cruelly shunned by their family after BOTH coming out as male in the same year

・Hunter Myles Wilburn, 21, and Karson Wyatt Inkly, 18, are both transgender

・Dairy Queen manager Hunter began to identify as male when he was 17, and came out in 2016; he began taking testosterone in October of this year

・Karson came out in 2017, just one year after his brother, and is due to start taking testosterone in January 2019

・The brothers both say that they faced negativity and criticism from their family members, and they credit each other with being their strongest supporter

・Hunter has also admitted that he’s struggled to find any resources to help him in his local area, which he believes is a result of living in the Bible Belt

・Karson also has a girlfriend, Harmony, whom he was dating before he came out as transgender, and he says she has been very supportive

Macmillan dictionaryによると ” to tell people that you are gay “ という風に記載されていますね。

Coming out to her parents was the hardest part.

What time is the next bus due?

The next meeting is due to be held in three months’ time.

Their first baby is due in January.

Cambridge Dictionaryによると ” to believe something that seems unlikely to be true: “というふうに記載されていますね。

He even tried to pretend he was my son – can you credit it?

It was hard to credit some of the stories we heard about her.

It was hard to credit that he had once been an actor.

Cambridge Dictionaryによると ” Resources are also things of value such as money or possessions that you can use when you need them: “というふうに記載されていますね。

The Internet has become a valuable resource in schools.

The government doesn’t have the resources to hire the number of teachers needed.

Two brothers have revealed that they were shunned by their family after both coming out as transgender just one year apart.

Dairy Queen manager, Hunter Myles Wilburn, 21, from Georgia, was a 17-year-old girl when he began to identify as male after years of struggling with gender dysphoria. But despite his friends being supportive when he came out on Facebook in 2016, his family didn’t take it so well.

The only members of his family that supported him was his youngest brother Taylor and his other brother and chef, Karson Wyatt Inkly, 18, who was also going through similar struggles in secret.

Their journeys have helped each other get through their body insecurities and Karson has had a lot of support from his girlfriend, Harmony since he came out as transgender.

‘I have to try and avoid using public restrooms because I am judged no matter which restroom I use. We’re human and we have feelings too,’ Hunter said.

‘I first started identifying as male during my junior year of high school where I came out to a close friend. She was and still is very supportive.

‘I was nervous about coming out to others, but slowly I did and every time I told someone new it took so much weight off my shoulders.

‘I struggle with dysphoria a lot; mainly with my chest and my voice. I did hide it from my family for the longest time and I hated the way it made me feel.

‘My mom supports me somewhat, but again my siblings Taylor and Karson are my biggest supporters.

be a weight off (one’s) shoulders (phrase)

Macmillan Dictionaryによると ” used to say that you are glad that you do not have to worry about something any longer: “というふうに記載されていますね。

Finally paying off my debts was a great weight off my shoulders.

I finally completed my tax return for this year. That’s a weight off my shoulders!

Talking over my problem with my close friend was a weight off my shoulders.

It was a weight off my mind, knowing she arrived home safe.

Knowing that you’ll be here to help is a weight off my mind.

The situation has improved somewhat during the past year.

The resort has changed somewhat over the last few years.

She’s somewhat more confident than she used to be.

We were somewhat tired after our long walk.

Hunter’s big reveal was followed by Karson’s own journey as transgender. While his transition is still fresh, Karson explains how he has now fully embraced his journey along with his brother.

‘At the age of fourteen, I began to feel more comfortable identifying as a man but was still very confused about it all, it wasn’t until I was sixteen that I realized that I was transgender,’ Karson said.

‘I began closing myself off from everyone and refused to make friends. I don’t have anyone in my family that is supportive. My main supporters are my girlfriend, Harmony, and my best friend and brother, Myles (Hunter).

‘Since my family didn’t accept my transition, I had to hide my true self until I was eighteen-years-old. At age sixteen, I told my brother Myles and my girlfriend Harmony.

‘At the age of seventeen, I told my aunt and when I was eighteen, I came out publicly. When I came out to my brother and girlfriend they were accepting.

‘But when I came out to my aunt she was not accepting and acted as if I hadn’t told her anything at all. When I came out publicly, I was kicked out of my parents’ house at the beginning of this year in February.’

Despite the fallout from coming out to their family, Hunter and Karson say they have never felt more like themselves since the reveal.

‘Now, that I’ve started my transition I feel so much better mentally. Beforehand I really couldn’t stand the way I looked because it wasn’t the way I saw myself,‘ Hunter said.

‘I recently just started testosterone. Every Wednesday I give myself my shot and that’s my favorite day of the week.’

Cambridge Dictionaryによると ” the unpleasant results or effects of an action or event: “というふうに記載されていますね。

The fallout from the Asian financial crisis has continued to affect business.

Cambridge Dictionaryによると ” connected with or related to the mind: “というふうに記載されていますね。

He was in good health both physically and mentally.

It’s going to be a tough competition but I’m mentally prepared for it.

Are the players mentally and physically prepared to play a tough game?

Karson explains how he has felt since coming out.

‘Before coming out, it felt as if there was a weight on my shoulders. I never wanted to look at myself in a mirror and hated the way my body felt and looked,‘ Karson said.

‘While I haven’t yet started my transition yet, I feel I am truly becoming who I am and no longer having to hide my true self. The hardest part is being patient to see results.’

‘It has made me more confident in myself and I feel like I’m slowly becoming the person I’ve always been,’ Hunter said.

‘I’m slowly learning to love myself and it hasn’t really affected my relationships. My family doesn’t like it, but I finally stopped worrying about how they feel about it and I’m just focusing on myself and how I feel.

‘The hardest part was just the starting process. Living in Tennessee is very hard due to being in what’s classified as the ‘bible belt’ it was very hard finding resources to help me.

‘My next step is having top surgery. I’m actually very interested in this surgeon located in Texas.’

Macmillan Dictionaryによると ” a doctor who is trained to perform operations that involve cutting open someone’s body, usually in a hospital ” です。