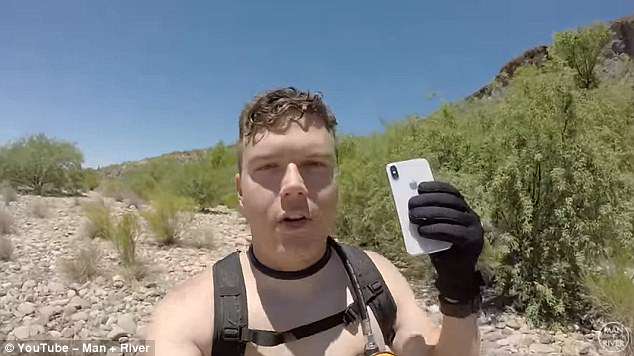 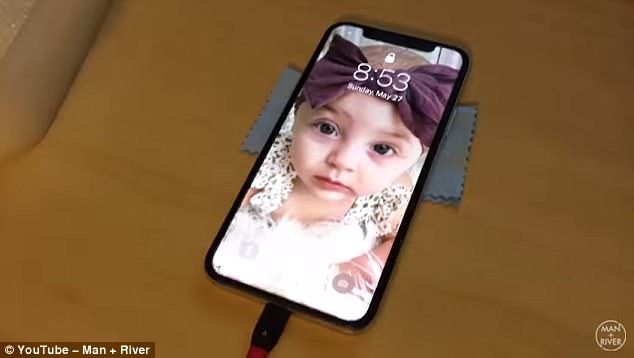 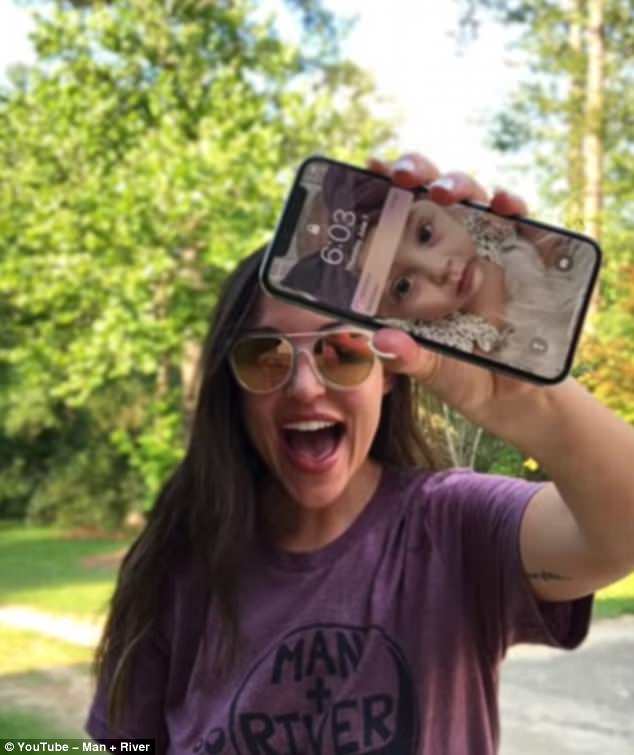 ・After drying it out for three days, he powered it on and called owner Alyssa King

Macmillan Dictionaryによると” if something dries out or is dried out, some or all the water comes out of it “というふうに記載されていますね。

If you don’t keep food covered, it dries out.

Water the ground regularly to stop it from drying out.

Usually when Dallas dips into a river on the hunt for lost treasures, he finds predictable items like sunglasses and jewelry.

So the star of YouTube channel Man + River couldn’t help but get excited when he stumbled upon an iPhone X while exploring Arizona’s Salt River.

But Dallas was even more shocked when he realized that the iPhone still worked – and made it his mission to return the phone to its owner.

Macmillan Dictionaryによると” to have no choice except to do something “いうふうに記載されていますね。

As I look back over my career, I cannot but smile.

Macmillan Dictionaryによると” to find something, or to meet someone, by accident “いうふうに記載されていますね。

We stumbled across him in the library.

A journalist finally stumbled on the truth.

Look at what I stumbled across at the flea market!

Since the iPhone was not in a waterproof case, Dallas let it dry out for three days, immersing it in a tub of silicone beads and even using a hair dryer.

While the iPhone X is advertised as ‘splash, water, and dust resistant’ it is not waterproof and is not guaranteed – or covered under warranty – by Apple.

But Dallas was in luck. When he put the phone on a charger, it began to light up.

Dallas then took the phone’s SIM card and stuck it into his own phone so he could find the original owner’s phone number.

‘Some owners have a “backup phone” that they are using, but it has the same phone number,’ he explained on his YouTube page.

He sent a text to a number belonging to Alyssa King, asking if she had lost a phone recently.

Macmillan Dictionaryによると” to put something or someone in a liquid, especially so that they are covered completely “と、” to spend most of your time doing something or thinking about it ” というふうに記載されていますね。

The shells should be immersed in boiling water for two minutes.

Immerse the egg in boiling water.

Sandra immersed herself in work to try and forget her problems at home.

She got some books out of the library and immersed herself in Jewish history and culture.

a disease-resistant variety of tomato

Why are you so resistant to change?

Cambridge Dictionaryによると” if a product is guaranteed, the company that made it promises to repair it, change it, or return the customer’s money if a fault develops within a particular period of time: “というふうに記載されていますね。

We offer franchise businesses with a guaranteed minimum income.

Macmillan Dictionaryによると” a company’s written promise to repair or replace a product that you buy from them if it breaks or does not work, usually for a specific period of time after you buy it “というふうに記載されていますね。

Is the CD player still under warranty?

I’ve had problems with the car, but it’s still under warranty.

You’re in luck. We’ve got one pair left in your size.

“Do you have any tickets for tonight’s game?” “You’re in luck – we have two left.”

Macmillan Dictionaryによると” if a light lights up, it starts to shine “というふうに記載されていますね。

A warning signal lit up on the dashboard.

Dallas then filmed the next morning, when he received a call from Alyssa.

‘Hi, this is Dallas,’ he says in the clip. ‘Is this the lucky person who lost their phone?’

‘Yes, it is!’ Alyssa screams excitedly.

‘We do have your phone,’ Dallas tells her. ‘I tried to power it on and it works perfectly.’

‘It works?’ Alyssa exclaims. ‘That is the craziest thing ever!’

Alyssa, who lives in Florida, then reveals that her she lost her phone more than two weeks ago while on vacation.

‘We should make a commercial for Apple, that’s pretty impressive for an iPhone X,’ Dallas replies.

Alyssa then tells him that she is especially overjoyed with the news because the phone had photos from her newborn daughter’s first five months.

Cambridge Dictionaryによると“​ to say or shout something suddenly because of surprise, fear, pleasure, etc.: “というふうに記載されていますね。

“You can’t leave now!” she exclaimed.

She exclaimed in horror when she saw me.

We’re overjoyed at your news.

Helen was overjoyed to hear that they had given her the job.

I’m overjoyed that you’re coming to visit me.

‘I had all her baby pictures on there and I did not back them up,‘ Alyssa tells Dallas. ‘I was devastated.’

‘The fact that you found it, you completely turned my world upside down.’

When Alyssa offers to pay for shipping, Dallas assures her that everything will be taken care of.

‘This is the best part of my job,’ he says. ‘Finding the owners of these things and getting them back to you. I’m so glad this worked out.’

Dallas called Alyssa’s reaction the best he’s ever gotten since he began hunting for lost items.

‘I had a lot of fun with this one,’ he tells his viewers. ‘Alyssa was so easy to work with and so appreciative to get her phone back with all her pictures.’

back up (phrasal verb)

Make sure you back up your files.

Macmillan Dictionaryによると“​ to change someone’s life completely, often in a way that is shocking or upsetting “というふうに記載されていますね。

My world has been turned upside down by this disease.

My father offered to take us to the airport.

Macmillan Dictionaryによると“​ to be successful, or to end in a particular way “というふうに記載されていますね。

If it doesn’t work out, you can always come back here.

Things worked out pretty well in the end.

I hope your new job works out.

In fact the trip worked out cheaper than we’d expected.

Cambridge Dictionaryによると” showing that you understand how good something is, or are grateful for something: “というふうに記載されていますね。

He was sincerely appreciative of their support.

Dallas, a free diver and scuba diver, has since posted the video to his YouTube channel, where it has been viewed more than 512,000 times.

Alyssa also posted about the experience on her Facebook page, revealing she had lost the phone while tubing down the river with a friend she was visiting in Arizona.

‘It was an absolute blast and the scenery was like something out of a movie,’ Alyssa wrote.

‘However, some rapids sprung upon us out of nowhere and my phone (which I shouldn’t have brought) went flying out of the plastic bag I had it in and sunk to the bottom of the river.’

Cambridge Dictionaryによると“​ an exciting or enjoyable experience or event, often a party: “というふうに記載されていますね。

You should have come with us last night – we had a real blast!

The party was a blast.

Thousands of new businesses have sprung up in the past couple of years.

New Internet companies were springing up every day.

out of nowhere (phrase)

The car seemed to come out of nowhere.

She said her attacker seemed to come out of nowhere.

Cambridge Dictionaryによると“​ to (cause something or someone to) go down below the surface or to the bottom of a liquid or soft substance: “というふうに記載されていますね。

The boat filled with water and began to sink.

The legs of the garden chair sank into the soft ground.

‘Mind you, I was in a tube and trying to fight against a STRONG current so there was really no recovering my phone.’

Alyssa said that while she doesn’t usually ‘let materialistic things bring me down‘, she was devastated when she realized the pictures on her phone weren’t backed up.

So she was even more ‘stunned, astounded, and absolutely blown away’ when Dallas called her weeks later to reveal the good news.

‘I can’t explain how happy I am,’ she wrote. ‘What a miracle guys.’

‘Thank you so much Dallas! Keep doing what you’re doing!’

He was really brought down by the loss of his job.

Why do you have to bring me down when I was feeling good about myself?

I was astounded to hear that Tina had left.

When I heard that song for the first time it just blew me away.

The ending will blow you away.