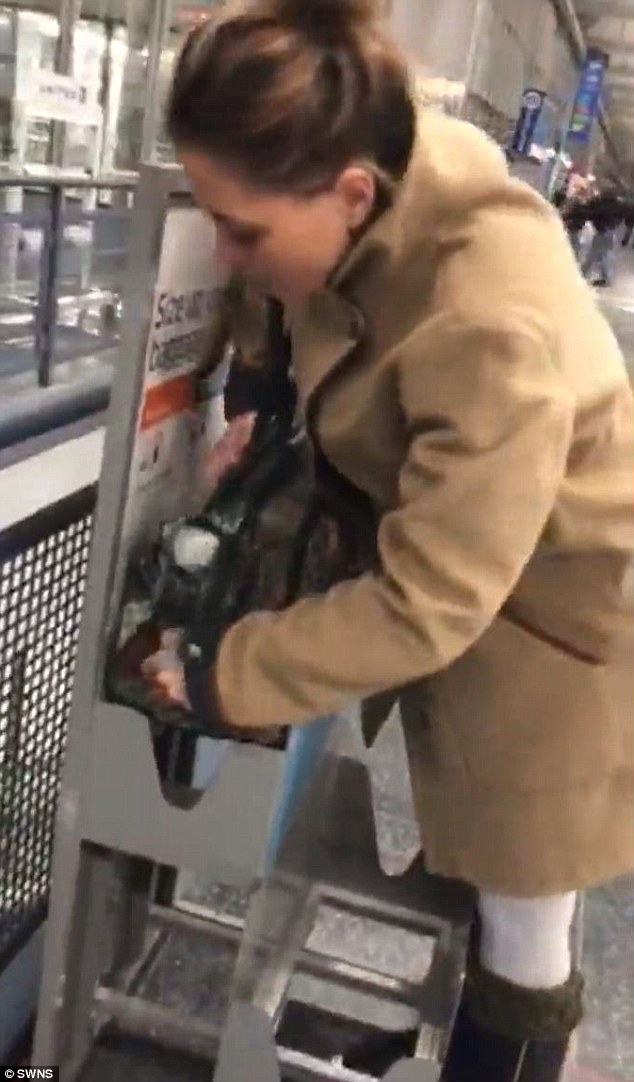 The teacher stopped in front of a little boy in the front row.

We had seats in the front/back row of the theatre.

I had a row with my boyfriend last night.

We had a blazing row a couple of years ago and I haven’t seen her since.

Rows about money are a common reason for the breakdown of marriages.

Cambridge Dictionary によると” the small cases or bags that a passenger can carry onto an aircraft or bus: “というふうに記載されていますね。

How many items of hand luggage am I allowed to take onto the plane?

・Natalia Rutkowski, 27, was checking in for a flight from Chicago to New Jersey with her mom Anna, 58, when she said United staff confronted her about a bag

・Mobile phone footage shows the account executive, of Lyndhurst, New Jersey, being asked to place the bag into a test rack at O’Hare International Airport

・It appears to fit inside the crate, but staffers are seen arguing that it is oversized

・A United employee is seen removing the bag and putting it in sideways, claiming it does not fit, despite the fact that there appears to be space below it

・After speaking with various staff members, Natalia and Anna were eventually allowed to board the flight home with their baggage

Cambridge Dictionaryによると” to face, meet, or deal with a difficult situation or person: “ というふうに記載されていますね。

As she left the court, she was confronted by angry crowds who tried to block her way.

I had to confront him about the damage to the car.

Becca will have to confront some frightening truths about this disease.

We need to confront these problems before it’s too late.

Macmillan Dictionaryによると” someone who is responsible for all the work done for a particular customer of a company, especially an advertising company or a public relations company “ と記載されていますね。

Cambridge Dictionaryによると ” a box made of wood, plastic, or metal, especially one divided into parts to hold bottles: “ という風に記載されていますね。

a crate of empty bottles

The wooden shipping crates were unloaded at the dock.

Shocking footage has emerged showing a heated row between airline staff and a flier after they repeatedly claimed her carry-on bag was too large—despite it fitting perfectly into their baggage rack.

Natalia Rutkowski, 27, was checking in for a flight from Chicago to New Jersey with her mom Anna, 58, when she said ‘rude’ United Airlines staff confronted her about a handbag.

Mobile phone footage shows the account executive, of Lyndhurst, New Jersey, being asked to place the piece of luggage into a test rack at O’Hare International Airport.

It appears to fit snugly inside the crate, but staffers are seen arguing that it is oversized. The fee to check in a bag with United is $25.

A United employee is then seen removing the bag and putting it in sideways before claiming that it does not fit, despite the fact that there appears to be space below it.

After speaking with various staff members, Natalia and Anna were eventually allowed to board the flight home to Newark Liberty International Airport with their baggage.

Natalia claims the encounter was ‘like saying a dog is a cat’, and left her and her mom, a Russian-born maid service manager who speaks limited English, feeling humiliated.

‘I had already checked my bag and was helping my mom to check in on the computer when a prompt on the screen said a United staff member had to swipe,’ Natalia said.

‘At first, an old woman said, “No, she is not allowed to take her bag onto the plane.”

‘As you see on the video she didn’t have any extra baggage, and the ticket allows for one personal item.

‘It was a certain dimension that the bag had to fit, but the woman didn’t even allow us to put the bag into the personal item bin to show them that it fit inside. She was extremely rude.

‘There was a lot of fuss. I was agitated and there were a lot of people starting to stare.’

Macmillan Dictionaryによると ” an employee, often of a political organization: “ と記載されていますね。

The march ended in a violent encounter with the police.

I had a bruising encounter with my ex-husband last week.

Cambridge Dictionaryによると ” If someone is humiliated, they have has been made to feel ashamed or stupid: “ と記載されていますね。

I’ve never felt so humiliated in my life.
She enjoyed humiliating me in front of the other students.

A hologram represents an object in three dimensions.

Please specify the dimensions (= the height, length and width) of the room.

a building of vast dimensions (= size)

A hologram represents an object in three dimensions.

Please specify the dimensions (= the height, length and width) of the room.

a building of vast dimensions (= size)

Cambridge Dictionaryによると ” a show of anger, worry, or excitement that is unnecessary or greater than the situation deserves: “ という風に記載されていますね。

She made such a fuss when Richard spilled a drop of wine on her blouse!

It’s all a fuss about nothing.

I don’t see what the fuss is about – he seems like a fairly ordinary-looking guy to me.

We tried to arrange a ceremony with as little fuss as possible.

What is all the fuss about?

Stop making such a fuss!

a lot of fuss over the new technology

She became increasingly agitated as the interview proceeded.

At this point, Natalia recounted, another employee who wasn’t working on the floor and might have been a manager asked what the issue was.

‘She asked me to put the bag into the bin, which I did, and she said, “OK, well the person who swiped has to see it.” I said, “This is the third time I’ve done it,”‘ Natalia added.

‘Then a man came over and shoved his badge in my face and took the bag out of the bin and then plopped it back in sideways so it purposely wouldn’t fit.

‘I didn’t understand why were treated like that. It was so ridiculous. It was like saying a dog is a cat.’

At this point, Natalia says the employees told her and her mother they were not getting on the plane.

‘Finally the last person who came over and I put it in and it clearly fit perfectly and he was like, “Oh, yes, it does fit. I don’t understand why we have this issue,”‘ Natalia recounted.

Cambridge Dictionaryによると ” to describe how something happened, or to tell a story: “ と記載されていますね。

She recounted some of her experiences working as a nurse in a hospital emergency room.

Macmillan Dictionaryによると ” to push someone or something with force “ と記載されていますね。

Is it OK if I shove some clothes in the washing machine?

I’ll just shove this laundry in the washer before we go out.

“Where should I put this suitcase?” “Shove it down there for the moment.”

He kicked Jason and shoved some other kid to the ground.

Everyone was pushing and shoving, all the way to the gates.

Just wait your turn – there’s no need to shove. 

Reporters pushed and shoved as they tried to get close to the princess.

He came and plopped down next to me.

Lynn plopped a paper cup down beside her.

I noticed drops of water plopping onto the carpet.

Large raindrops began to plop on the car roof.

I purposely spoke loud enough to be overheard.

The trial has been purposely delayed.

I purposely avoid making train journeys during the rush hour.

Cambridge Dictionaryによると ” in a direction to the left or right, not forwards or backwards: “ と記載されていますね。

The fence is leaning sideways.

If you would move sideways to the left, I can get everyone in the picture.

Crabs walk with a sideways motion.

Can you move the chairs sideways a bit?

We turned the table sideways to make more room.

If you’d move sideways I could see better.

The mother and daughter, who had been at a relative’s christening ceremony that weekend, were eventually allowed to board the 7:19 pm flight.

But Natalia said she and Anna—who each paid around $166 for the round trip—were furious about the way they were treated.

‘I was shaking and I literally felt like I was sweating and agitated,’ she said. ‘My mom was teary. It was just an overwhelming situation. I had never been so disrespected and mistreated and embarrassed.

‘Honestly I was just bewildered and my mom was emotional and angry.

‘I hope that United apologize to us because it was just an unfair experience, and I hope that in general they realize that this type of treatment for paying customers isn’t right.

‘I want people to know that this airline is this bad. They need to better train their staff.

‘At this point, I wouldn’t fly with them again.’

United Airlines said: ‘The customer was allowed to carry on the personal item.

‘We are following up with this customer and are reviewing this incident with our team internally to better understand what happened.’

The actress was pictured looking teary on the movie set.

Cambridge Dictionaryによると ” the way you deal with or behave towards someone or something: “ という風に記載されていますね。

the treatment of prisoners

Peter gets special treatment because he knows the boss.

I don’t expect special treatment – I just want to be treated fairly.

He accused the governor of giving rich people special treatment.

Macmillan Dictionaryによると ” to try to find out more about something, or to do something more to deal with it “ という風に記載されていますね。

They never followed my complaint up.

As a news reporter, when something important happens, I have to follow it up.