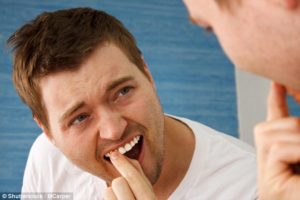 One THIRD of millennials only brush their teeth once a day – and most Americans would rather go without sex for a month than see a dentist, study reveals

・A survey of 2,000 Americans found that three in every 10 people between 18 and 34 brush their teeth less than dentists recommend

・poor oral hygiene has been linked to higher risks of many illnesses later in life, including heart disease and dementia

・The poll also found that Americans of all ages are more terrified of the dentist than they are of surgeons, neurologists, and going without sex

Three villages have gone without water for days.

He went without sleeping for two days.

I‘d rather go without food than work for him.

Cambridge Dictionaryによると” a study in which people are asked for their opinions about a subject or person: “というふうに記載されていますね。

We took a poll this week.

We‘re carrying out/conducting a poll to find out what people think about abortion.

The latest opinion poll puts the Democrats in the lead.

A recent poll indicated that most people opposed the changes.

According to a poll conducted last week, 75% of the public support the Prime Minister.

One third of millennials only brush their teeth once a day, according to a new study.

Even in adulthood, the research revealed that Americans can be neglectful of their oral hygiene, with 62 percent reporting that they were too scared to go to the dentist.

Skipping the ritual sounds harmless enough, but going without brushing and flossing has been linked to health risks ranging from gum disease to dementia and even erectile dysfunction.

The study, conducted by market research company OnePoll and commissioned by a toothpaste brand, adds to recent work that has identified startling links between oral hygiene and income disparity and overall health in the US.

I’m sure my boss thinks I’ve been neglectful of my duties recently.

Coffee and the newspaper are part of my morning ritual.

My morning ritual includes reading the newspaper while I drink my coffee.

Their meetings became a weekly ritual.

He went through his nightly ritual of locking all the doors.

Their wrestling was just harmless fun.

You can hold the snake: it’s harmless.

Most of these bugs are harmless to us.

Some think television hurts children and others regard it as harmless entertainment.

Cambridge Dictionaryによると” to make a connection between two or more people, things, or ideas: “ と記載されていますね。

Rock music has often been linked with the drug culture.

The vaccine has been linked to autism.

The group has been linked with recent bombings.

Average temperatures in July range from 15 to 25 degrees.

The variety of accommodation available ranges from a studio flat to a four-bedroomed house.

Beauty treatments range from an eyelash tint at £8 to a deep cleansing facial costing £58.

He commissioned a series of portraits of his family.

She‘s commissioned an artist to paint her portrait.

They commissioned me to write a series of articles on language.

The newspaper commissioned a series of articles on the worst excesses of the fashion industry.

Nobody made any response to his startling suggestion.

the growing disparity between rich and poor

There is still a disparityin salaries among people doing the same job.

He will oppose a gross disparity in salary increases between teachers and other state employees.

The American Dental Association only asks that we dedicate four minutes of our day to brushing our teeth.

But new research suggests that these two stretches of two-minutes spent on oral hygiene are too much for millennials to bear.

Brushing and flossing help to minimize plaque, a clear sticky film that builds up on teeth and gums from bacteria that live naturally in the mouth.

When this film is left on teeth for too long, it can harden into unsightly tarter that draws more tooth- and gum-damaging bacteria.

The prospects of bad breath, cavities or losing teeth or gums is threatening enough, but higher levels of bacteria have also been found in the mouths of people in dementia and may increase susceptibility to pneumonia.

A growing body of evidence on the link between gum disease and heart disease has even led the American Heart Association to deem gum disease an early marker of heart problems.

Macmillan Dictionaryによると ” to spend your time and effort doing something “ と記載されていますね。

Andy wants to dedicate more time to his hobbies.

This woman has dedicated her whole life to helping others.

He has dedicated his life to scientific research.

The new president said she would dedicate herself to protecting the rights of the sick and the homeless.

You can’t learn it all in such a short stretch of time.

He’ll surf the Internet for anything up to six hours at a stretch.

Macmillan Dictionaryによると ” to become hard or firm, or to make something hard or firm “ と記載されていますね。

The bread will harden if you don’t cover it.

The mixture hardens as it cools.

In a few hours the cement will harden.

As the war progressed, attitudes on both sides hardened.

Macmillan Dictionaryによると ” used as a polite word for ugly “ と記載されていますね。

The garden was full of unsightly weeds.

He had undone the buttons of his shirt, exposing an unsightly expanse of white flesh.

You might need some sugar on the rhubarb – it’s a little tart.

Cambridge Dictionaryによると ” the idea of something that will or might happen in the future: “ という風に記載されていますね。

The prospect of spending three whole days with her fills me with horror.

I’m very excited at the prospect of seeing her again.

We face the prospect of having to start all over again.

the gene that controls susceptibility to nicotine addiction

Macmillan Dictionaryによると ” to consider or judge something in a particular way: “という風に記載されています。その副詞です。

The area has now been deemed safe.

The story was deemed too controversial and so they spiked it.

We will provide help whenever you deem it appropriate.

But the findings of the new survey of 2,000 people suggest that many Americans may fear a visit to the dentist even more than any of those potentially life-threatening illnesses.

When asked to compare the fear-factors for a number of medical appointments, 62 percent of Americans said that a trip to the dentist was scarier than all others – outranking visits to neurologists or surgeons.

In the survey’s ‘would you rather’ section, a third of respondents would forego sex for a month if it meant avoiding the dentist, and 19 percent preferred speaking to a crowd of 50 to some one-on-one time with an oral doctor.

The fear is real for everyone, but a bit widespread among millennials: 24 percent of people over 55  said they were uncomfortable going to the dentist, and 27 percent of those between 18 and 34 were.

But that fear does not seem to have translated into hygienic practices to avoid the (apparently) dreaded dentist trips.

Three in every 10 millennials admitted that they usually only brush their teeth once – which doesn’t bode well for their flossing habits or lifetime oral health.

Craig Dubitsky, founder of Hello Products, which sponsored the research, told Daily Mail Online he wonders if the generation’s lax attitude toward oral hygiene might be related to the fact that they are ‘spending less time together [in person] and more time together online.’

‘Online, you can enhance your teeth, but you can’t Photoshop yourself to good health,’ he said.

‘Research has shown that there are many linkages to oral health and your overall health,’ said Dr Lawrence Fung, a dentist in Los Angeles.

Macmillan Dictionaryによると ” someone who answers questions, especially on a questionnaire (=a set of written questions) or for an opinion poll “ と記載されていますね。

Sixty-four per cent of respondents reported side effects from the drug.

In a recent opinion poll, a majority of respondents were against nuclear weapons.

Cambridge Dictionaryによると ” to not have or do something enjoyable: “ と記載されていますね。

I shall have to forgo the pleasure of seeing you this week.

The board members have decided to forgo any salary increase.

She decided to forgo flowers at the funeral and asked people to send money to a charity instead.

This does not bode well for the future of the peace process.

The fact that we haven’t heard from him for so long does not bode well.

These recently published figures bode ill/do not bode well for the company’s future.

Macmillan Dictionaryによると ” not paying enough attention to rules, or not caring enough about quality or safety “と記載されています。

Security at the airport seemed lax.

the lax morals of today’s society

Cambridge Dictionaryによると ” the existence or forming of connections between things “ と記載されていますね。

There’s a direct linkage between cultural values and the way people live.

We haven’t found a linkage between the attacks.

The document made no linkage between decommissioning and release of prisoners.

a complex linkage of nerves