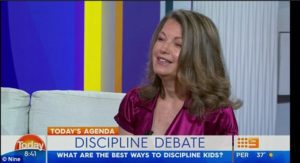 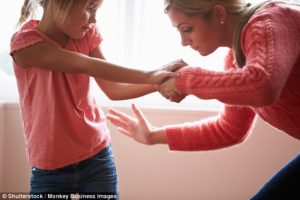 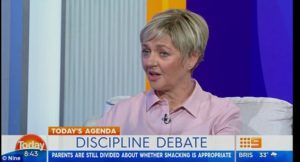 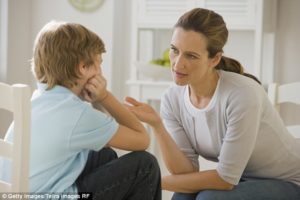 Smacking your children is OKAY and should be the ‘first line of discipline’, says mother and author – but up to what age?

I don’t believe it’s right to smack children when they’re being naughty.

I never smack my children.

I’ll smack your bottom if you don’t behave yourself.

the first line of (phrase)

Colin Dictionary によると” If you refer to a method as the first line of, for example, defence or treatment, you mean that it is the first or most important method to be used in dealing with a problem. “というふうに記載されていますね。

Passport checks will remain the first line of defence against terrorists.

The first line of treatment is to help the affected skin by moisturising it regularly.

He refused to comment on the outcome of the election.

It’s too early to predict the outcome of the meeting.

A mother and author of a parenting guide believes parents should be able to smack their kids.

Speaking on Today, Sue Edgerley revealed she takes a more traditional stand on parenting – one where smacking is an acceptable form of discipline.

‘I think smacking should be the first line of discipline when it comes to children,’ she said.

Cambridge Dictionaryによると ” training that makes people more willing to obey or more able to control themselves, often in the form of rules, and punishments if these are broken, or the behaviour produced by this training: “ という風に記載されていますね。

There should be tougher discipline in schools.

It is the teacher’s job to maintain discipline.

Macmillan Dictionaryによると” an attitude or opinion about something, especially one that you state publicly “ と記載されていますね。

I couldn’t vote for them because of their stand on social issues.

The president has not taken a stand on this issue.

The self-published author of 5 Keys To Parenting said smacking a child was an effective way to discipline kids, but this needed to be done in an appropriate way.

Ms Edgerley explained there was a difference between lashing out and hitting a child and smacking as a way to bring order into the home.

She said the advantages of smacking was that it was an effective and simple way to deter a child from a behaviour.

‘A parent who delivers a smack on the hand or on the bottom in a calm and controlled manner is not scary to a child. They know what to expect, they know their parents are in control.’

Cambridge Dictionaryによると ” to suddenly attack someone or something physically or criticize him, her, or it in an angry way: “ と記載されていますね。

Occasionally the patients will lash out at the nurses.

Why’s Tina in such a bad mood? She really lashed out at me when I was late for work.

I’m trying to bring a bit of order to the garden.

I want to get my accounts in order before I leave.

Macmillan Dictionaryによると ” to make someone decide not to do something “ と記載されていますね。

The rain didn’t deter people from coming to the game.

These measures are designed to deter an enemy attack.

High prices are deterring many young people from buying houses.

Macmillan Dictionaryによると ” a state in which you are not affected by strong emotions such as excitement, anger, shock, or fear “ と記載されていますね。

He accepted her decision with his usual calm.

Smacking isn’t illegal in Australia, and light smacking with an open hand isn’t deemed unacceptable as such.

Ms Edgerley said smacking is effective up until a child was 10-years old as by then parents should have established the rules of the house.

She said parents shouldn’t smack teenagers because children who had grown up in a more disciplined household would already have respect for authority.

While Ms Edgerley’s position is echoed by 70 per cent of Australians according to a survey by Kidspot, it’s not one parenting expert Julie Green agrees with.

Also speaking on the program, Ms Green, of the parenting research centre, said that smacking isn’t a good way to discipline kids.

Macmillan Dictionaryによると ” to consider or judge something in a particular way: “ という風に記載されていますね。フォーマルな表現です。

We will provide help whenever you deem it appropriate.

The story was deemed too controversial and so they spiked it.

‘Smacking is effective in the short term but not in the long term because it doesn’t teach children self-control or how to manage their behaviour.’

The expert said studies have shown that smacking is linked to an increased likelihood of lower self-esteem, poor mental health and aggressive behaviour.

‘Smacking could injure a child, and send a message that it’s okay to hit others.’

This latest dispute greatly increases the likelihood of a strike.

There is little likelihood now that interest rates will come down further.

The likelihood of developing cancer is increased in people who smoke.

There’s a strong likelihood that he will run for president next year.

There is every likelihood that more jobs will be lost later this year.

The compliments she received after the presentation boosted her self-esteem.

All the people in the study had low self-esteem and had issues with their bodies.

Her recent success at work has been very good for her self-esteem.

Of course you try to build up your children’s confidence and self-esteem.

Ms Green also said that while smacking provided an immediate consequence, there were better ways to manage a child’s behaviour.

She said there was evidence to show positive parenting – a style that encourages and rewards good behaviour – is more effective than forms which highlight the negative.

‘Parents have to be mindful that giving a child a smack because you are frustrated is not really teaching them the right thing,’ she said.

‘In our society, we can’t really hit someone because we are frustrated with them.

‘There are now many other ways we can use to guide our children.’

Ms Witt said more effective strategies for disciplining children was to raise them with a strong sense that there are consequences for their actions.

Macmillan Dictionaryによると ” happening or done now, without any delay “ と記載されていますね。

Our government must take immediate action.

We must make an immediate response.

Dioxin is a poison that takes immediate effect.

I think we can solve this problem without resorting to legal action.

I had to resort to violence/threats to get my money.

When she didn’t answer the phone, I resorted to calling up to her from the street.

Cambridge Dictionaryによると ” old-fashioned and therefore not as good or as fashionable as something modern: “ と記載されていますね。

Nowadays this technique is completely outdated.

This handbook is outdated.

outdated ideas about the family

Mindful of the poor road conditions, she reduced her speed to 30 mph.

Mindful of the poor road conditions, she drove slowly.

Politicians are increasingly mindful that young voters are turning away from traditional parties.

Travellers ought to be mindful of their surroundings.

Sally was mindful that her comments might upset him.