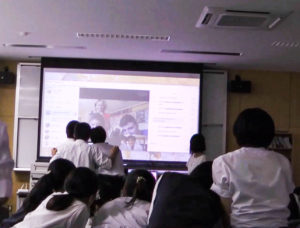 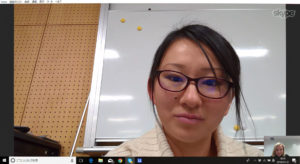 English teacher challenges students to plug in to the world

Cambridge Dictionaryによると” to invite someone to compete or take part, especially in a game or argument: “というふうに記載されていますね。

Tina has challenged me to a game of poker

They challenged us to a game of football.

Can I challenge you to a game of chess?

With this latest book, she is clearly hoping to plug into the international market.

Andy is really plugged into the popular music scene.

The English-language learning programs in Japan’s public schools have long been criticized for being too focused on rote learning.

But Mio Horio, a 32-year-old English teacher from mountainous Shiga Prefecture, is challenging the nation’s system and nudging her students to think outside the box.

Horio’s teenage students interact with young people worldwide via Skype and are encouraged to learn about the world on their own.

Horio’s aim is to help her students boost their communication skills and raise their global awareness, both of which she sees as critical in international settings.

Rote learning does not really give people any insight into their subject.

She learned multiplication by rote.

Macmillan Dictionaryによると” to encourage someone in a gentle way to do something “ と ” to use a part of your body, especially your elbow, to give a little push to someone or something “ という風に記載されていますね。

She tries to nudge her students into reading more.

The children were giggling and nudging each other.

He nudged the cat off the sofa so that he could sit down.

My wife nudged me to tell me to get off the phone so that she could use it.

Patrick nudged the door closed with his foot.

To interact with (verb)

Dominique’s teacher says that she interacts well with the other children.

In large classes, children feel that they cannot interact with the teacher properly.

It’s interesting at parties to see how people interact socially.

He does not interact well with the other students.

They flew from New York to New Delhi via Frankfurt.

The plan was to carry gas via Iran to Turkey.

Reports are coming in via satellite.

I only found out about it via my sister.

It’s easy to check your bank account via the Internet.

Blake spoke to the audience live via satellite from San Diego.

Her efforts have been recognized by the international education community, and in December, Horio was placed on a short list of 50 candidates for the Global Teacher Prize, known in the industry as the Nobel Prize for education.

Horio is the second Japanese teacher to be nominated for the prize in its four-year history. The winner is selected from over 30,000 candidates from 173 countries.

“People believe that teaching about global issues is impossible in rural areas, and they imagine a globally oriented approach to education as something taking place in big cities like Tokyo, Osaka or Kyoto,” she told The Japan Times in a recent interview via Skype. “But you can find globally minded students in this kind of rural area.”

Macmillan Dictionaryによると ” mainly concerned with, or directed towards, a particular group, activity, or situation “ と記載されていますね。

She wants to turn the company into a profit-oriented organization.

Hotels are a service-oriented industry.

Are you self-motivated, goal-oriented and handy with a camera and a computer?

Analysts recommended a goal-oriented cost-cutting program to get the company back on track.

Macmillan Dictionaryによると ” the school, college, or university where you were a student “ と記載されていますね。

Horio majored in English and speech communication at Kobe City University of Foreign Studies in Hyogo Prefecture. Although she never studied abroad, she believes that teaching English and educating Japan’s youth about global challenges is vital to strengthen Japan’s foreign relations.

“Japan has long been among the world’s leading (economies) … and now that Tokyo has been selected to host the Olympics in 2020, we will see the number of foreign visitors coming to Japan grow,” she said. “Until now, many people have shied away from using English, but saying they lack an opportunity to travel abroad is just a bad excuse,” given the ease of getting online across the globe.

Cambridge Dictionaryによると ” to study something as your main subject in college or a university:: “ と記載されていますね。

She majored in earth sciences at Arizona State.

Skilful employees are vital to the success of any company.

It’s absolutely vital that you do exactly as I say.

It is vital to get medical supplies to the area as soon as possible.

Macmillan Dictionaryによると” to avoid someone, or to be unwilling to do something, because you are nervous, afraid, or not confident “ と記載されていますね。

However, she laments the tendency in the nation’s English-language education system to emphasize theory over practice, which she says results in students developing a passive attitude toward their studies.

Horio engages students in discussions on world news and debates on topics such as whether only native speakers should teach English in Japanese schools or whether schools should switch their focus from English to Chinese.

Using Skype, she has so far connected her students with counterparts from 25 countries, including Vietnam, Kenya and Israel. Horio uses a questionnaire-based program meant to enable students to expand and test their general knowledge and also raise their awareness of global issues and cultural differences.

He lamented his students’ lack of interest in the classics.

The poem opens by lamenting (over) the death of a young man.

My grandmother, as usual, lamented the decline in moral standards in today’s society.

Some older people lament the loss of close local communities.

Cambridge Dictionaryによると ” If someone has a tendency to do or like something, they will probably do it or like it: “ と” If there is a tendency for something to happen, it is likely to happen or it often happens: “ と記載されていますね。

His tendency to exaggerate is well known.

There’s a tendency for a new manager to make changes.

You have a tendency to avoid arguments.

She has a tendency to work late.

There is a tendency for unemployment to rise in the summer.

He has engaged in a dispute with his former business partner.

be meant to be (phrasal verb)

It was meant to be an apology but it only made her angry.

This exercise isn’t meant to be difficult.

“Students sometimes notice they had biased notions,” she said, recalling a session with children from Israel during which the Japanese students were surprised to see Israelis leading an ordinary life despite reports on conflicts in the region.

She said the classes have helped motivate her students and she is happy to see them sometimes continue discussions in English afterward.

She quoted a first-grader who participated in a Skype call with Malaysian students in May as saying: “Even though Malaysians have different religions and different world views, we could understand each other. It made me think about how people around the world should make an effort to gain mutual understanding instead of fighting over differences in religion.”

The show’s director rejects the notion that seeing violence on television has a harmful effect on children.

She knows how to motivate people.

He was primarily motivated by the desire for profit.

We must motivate students to take charge of their own learning.

Teaching is all about motivating people to learn.

quote someone as saying something (phrase)

Macmillan Dictionaryによると ” to repeat the words that someone else has said or written: “ と記載されていますね。

“If they’re flexible, we’re flexible”, the official was quoted as saying.

The minister was quoted as saying that he didn’t care about jobs.

Being the first certified “Skype Master Teacher” in Japan — a title issued to educators who use Skype for global education — Horio said, “I want (my students) to realize that what they learn at school is mirrored in society and how it’s linked to the world outside Japan.”

On top of being named Skype Master Teacher of 2016 by Microsoft Corp.’s education unit, she was also recognized as a Microsoft innovative educator expert.

Since May, she has cooperated with the Japanese nonprofit group CBB, based in Cambodia, which operates language education facilities for the country’s impoverished children and runs a project to help local children improve their English-language skills. Education, Horio said, is critical in impoverished regions to tackle poverty and other issues.

Our newspaper aims to mirror the opinions of ordinary people.

Does art mirror society or shape it?

a remote and impoverished island

The winner of this year’s Global Teacher Prize — worth $1 million and sponsored by the Varkey Foundation, a United Arab Emirates educational charity — will be announced on March 18 in Dubai.

If she wins, Horio envisions using the money for various educational purposes in Japan and around Asia.

“There are children who have no access to education,” she said, expressing her wish to help them.

Horio said she would also like to use the money to help rebuilding efforts in areas of Japan hit by disasters.

He envisioned a partnership between business and government.

The company envisions adding at least five stores next year.

We envisage charging a small sum for the use of our services.

Macmillan Dictionaryによると” a question, often expressing doubt about something or looking for an answer from an authority: “ と記載されていますね。

I’ve got a query about my tax.

We have received many written queries about the product.

If you have any queries about your treatment, the doctor will answer them.

We have a number of queries regarding delivery.

Macmillan Dictionaryによると ” the state of being ready for something “ と記載されていますね。

The army is in a state of preparedness for war.