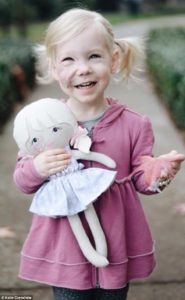 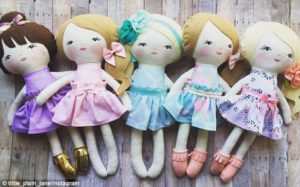 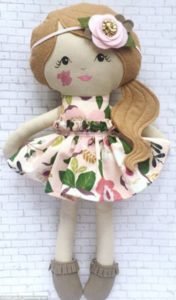 ‘This is the most wonderful gift’: Little girl born with large birthmark on her face receives a matching doll that looks just like her for Christmas

Cambridge Dictionaryによると ” having the same colour or pattern as something else: “というふうに記載されていますね。

・Charlie Crenshaw, a two-year-old girl from California, was born with capillary hemangioma and a large red ‘strawberry birthmark’ on her face

・Her mom, Katie Crenshaw, commissioned a doll that looks just like her from the company Little Plain Jane

・The company, created by mom Kayla Baker, specializes in custom-made dolls In pictures on Katie’s blog, Charlie looks thrilled with the doll, which has a matching birthmark on its cheek

The newspaper commissioned a series of articles on the worst excesses of the fashion industry.

She‘s commissioned an artist to paint her portrait.

A set of stamps has been commissioned in commemoration of Independence Day.

They commissioned me to write a series of articles on language.

He commissioned a series of portraits of his family.

To specialize in (verb)

Cambridge Dictionaryによると” to spend most of your time studying one particular subject or doing one type of business: “ と記載されていますね。

a travel company that specializes in European tours

She hired a lawyer who specializes in divorce cases.

These nurses specialize in the care of the dying.

He specializes in breeding large dogs such as Irish wolfhounds.

The store specializes in Asian antiques.

a restaurant that specializes in seafood

a lawyer who specializes in taxation

A little girl from California who was born with a rare birthmark covering half her face was thrilled to receive a lookalike doll for Christmas.

Two-year-old Charlie Crenshaw has capillary hemangioma, which manifests in part as a large red ‘strawberry birthmark’ on her face. For the holidays this year, mother Katie Crenshaw commissioned a doll to match her daughter — and the smiley blonde toddler looks ecstatic to have received the gift.

Katie, a blogger and mom-of-three, took to her Instagram and Facebook pages to show off pictures of Charlie on the occasion, writing: ‘You guys. Charlie has a baby doll that looks JUST like her thanks to Little Plain Jane!!!

Macmillan Dictionaryの意味によると ” to show something clearly, through signs or actions: “ と記載されていますね。

Jane manifested an unwillingness to sit and talk to Lydia.

The workers chose to manifest their dissatisfaction in a series of strikes.

Lack of confidence in the company manifested itself in a fall in the share price.

The new president was greeted by an ecstatic crowd.

Macmillan Dictionaryによると” to start doing something as a habit“ と記載されています。

She was so depressed she took to drink.

I seem to remember that on that occasion he was with his wife.

She has lied on several occasions.

This meeting provides an occasion (= a suitable time) to discuss the issues facing our school.

There was a celebration on the occasion of the school’s anniversary.

I have a suit but I only wear it on special occasions.

She has lied on several occasions.

‘The time and care that this shop took to make the birthmark identical to Charlie’s leaves me speechless,‘ Kate wrote. ‘Charlie hasn’t put the doll down since I gave it to her and named her (all by herself): Princess Cheek.’

‘This is the most wonderful gift we could have received this Christmas. This little girl has never been happier,’ she added.

Charlie was born with a rare condition called capillary hemangioma, a vascular tumor that develops early in pregnancy. While not life-threatening, the tumors can cause complications if they are located near an airway or an eyelid. As Charlie’s is located on her right cheek, it is monitored to prevent it from obstructing her vision.

Most hemangiomas eventually disappear, and Charlie also takes medication to prevent her tumor from getting bigger.

Mom Katie had previously spoken out about the stigma surrounding the little girl’s facial mark, which is roughly two inches wide and two inches long, in a powerful essay on her blog Typical Katie.

The test is identical to the one you took last year.

This house is almost identical to the one where I lived as a child.

The two rooms were virtually identical.

His betrayal left her heartbroken.

I was left with the impression that she wasn’t being quite honest.

Kate’s sudden departure left us all wondering what was going to happen.

Cambridge Dictionaryによると” relating to the tubes that carry blood or other liquids in animals and plants:“というふうに記載されていますね。

Cambridge Dictionaryによると” a mass of cells in the body that grow faster than usual and can cause illness: “ と記載されています。

She died of a brain tumour.

an operation to remove the tumour

Some people develop complications after surgery.

If any complications arise, let me know and I’ll help.

Dave couldn’t find his passport at the airport and then there were further complications when Fiona lost her baggage.

Macmillan Dictionaryによると” to block a path, passage, door etc so that it is difficult or impossible for someone or something to move along or through it “ と ” to take action in order to prevent someone from doing something or to prevent something from happening “ という風に記載されています。

Seven people were arrested for allegedly obstructing a highway.

The trees in their garden obstruct our view of the sea.

He disliked the project but had not actively obstructed it.

After the earthquake many roads were obstructed by collapsed buildings.

Her view of the stage was obstructed by a pillar.

‘We don’t need to talk about it every time you look at her,’ Katie wrote. ‘We see past the color of her face. Charlie is Charlie and it’s part of who she is. It doesn’t need to be constantly commented on, critiqued, or questioned.’

‘It’s a part of her unique beauty. It may never disappear, and guess what? It doesn’t have to,’ she added. ‘I would much rather chat about her latest milestone achievement, her amazing smile, or how gorgeous her eyes are.’

And now Charlie can see her beauty reflected in her new go-to toy.

The special doll was made by Little Plain Jane, which is owned by mom-of-two Kayla Baker and specializes in custom-made dolls that retail for $50.

Writing on her Etsy page, Kayla revealed that the brand was inspired by her three-year-old daughter Paige, who has autism.

Cambridge Dictionaryによると” an important event in the development or history of something or in someone’s life: “ と記載されています。

He felt that moving out of his parents’ home was a real milestone in his life.

This film was a milestone in the history of cinema.

We’ve been married now for 20 years, a real milestone.

Macmillan Dictionaryによると” the go-to person, organization, website etc is the best one to use when you need to achieve something “ という風に記載されています。

He was the company’s go-to guy for new ideas.

The hotel concierge is the go-to guy if you need something immediately.

Cambridge Dictionaryによると” to be sold at a particular price: “ と記載されています。

Taking to Instagram, she shed some light on why she felt inspired to create dolls that look like their owners: ‘I have a sweet 3 year old daughter with Autism, who is non-verbal, still in diapers, and doesn’t have a way to really functionally communicate yet,’ she shared.

‘So my mama-heart knows what its like when your little one isn’t “normal” or looks “different” than the other children around you, or to get those stares in the check-out line at Target. And lets be honest, these dolls are just as much for us mamas as they are for our littles!’

She added that she felt thankful she could make dolls to match the needs of individual children and thanked the parents for giving her the opportunity to do so.

‘I love getting to meet each of you and seeing photos of your beautiful babies!’

Experts hope the plane’s flight recorders will shed light on the cause of the crash.

I had hoped that he would be able to shed some light on the problem.

Cambridge Dictionaryによると” to make someone feel that they want to do something and can do it: “ と記載されています。

After her trip to Venezuela, she felt inspired to learn Spanish.

She inspired her students to do the best they could.

We use interactive displays to inspire children to read and write for pleasure.

Body language is a potent form of non-verbal communication.

The systems are visually and functionally similar.

The office is functionally designed.