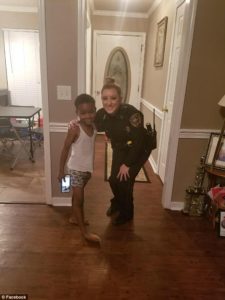 ‘I want y’all to come back to my house and take him to jail‘: Mississippi boy, five, dials 911 to report that the Grinch is trying to steal Christmas…. and the cops show up to his house!

We were expecting 30 people to come, but half of them never showed up.

How many people showed up to the meeting?

He showed up late for the meeting.

He was rude and unhelpful and always showed up late to work.

・TyLon has a plan in case the Grinch does appear: he says he will wrestle him and hold him until the police show up

・He wants to become a police officer

Macmillan Dictionaryによると ” to tell someone that something will definitely happen or is definitely true, especially in order to remove doubt about it “というふうに記載されています。フォーマルな表現です。

“Don’t worry, your car will be ready tomorrow,” the mechanic assured him.

She assured him (that) the car would be ready the next day.

The governor assured the voters (that) taxes would not be raised.

I was a bit alarmed at/by how much weight she’d lost.

I was alarmed to hear that she was coming.

I’m rather alarmed that we haven’t heard anything.

Don’t be alarmed: it wasn’t a serious accident.

I was alarmed to see that the men were carrying guns.

A five-year-old Mississippi boy called 911 to report that the Grinch was trying to steal Christmas.

‘I can NOT make this up!!! My 5 year old brother called the police and said that the Grinch is stealing people Christmas and he don’t want him to steal his so they really came to our house,’ said brother TeDera Dwayne Graves, who was home for the holidays from the Air Force.

You can’t make this stuff up

Urban Dictionaryによると” An expression said in response to an an unbelievable fact or piece of news. “ と記載されています。

TyLon had been watching videos online when he became alarmed about the Grinch. He told his mom, Teresa Pittman, that he dialed 911, but she says she didn’t quite believe him until an officer knocked on the door.

‘Our dispatcher posted a status on Facebook that she had received a call from a little boy … and he told her he thought the Grinch was going to be coming to steal his Christmas,’ the police officer said to The Clarion Ledger.

‘I asked her to send me his address.‘

The two situations are quite different.

The colours almost match but not quite.

I enjoyed her new book though it’s not quite as good as her last one.

I was feeling quite tired after our walk.

They said the dog was quite badly injured.

Cambridge Dictionaryによると” a person who is responsible for sending out people or vehicles to where they are needed, especially emergency vehicles: “ と記載されていますね。

He has been an ambulance dispatcher for ten years, working in our central control room.

Everyone always asks us, what are the funniest status updates?

‘I kind of find it really funny. … Every Christmas morning, my dad wears these Grinch pants,’ she added.

‘It’s his favorite movie. Growing up seeing the Grinch every Christmas was my favorite thing.’

Assuring the boy that the Grinch would not steal his Christmas, Develle listened as Tylon shared that he had seen the video on Facebook and that he watched plenty of videos about the Grinch.

‘So what are you going to do if he tries to steal your Christmas?’ Develle asked TyLon.

The boy added: ‘I want y’all to come back to my house and take him to jail.’

His mom was still in disbelief that her son really thought the green villain was going to take all of his presents.

TyLon has a plan in case the Grinch does appear: he says he will wrestle him and hold him until the police show up.

“I’m going to say put your hands behind your back and get down on the ground, then when he gets on the ground, I’m gonna say, ‘Why are you stealing Christmas?’ ” he added.

TyLon wants to become a police officer and doesn’t seem to be too far off from accomplishing his dreams.

Cambridge Dictionaryによると” the feeling of not being able to believe that something is true or real: “ と記載されています。

Liz stared at us in disbelief as we told her what had happened.

He shook his head in disbelief when I told him about the crash.

Cambridge Dictionaryによると” A time that is far-off, is a long time before or after the present: “ と記載されています。

some point in the far-off future ​

in those far-off days of our youth