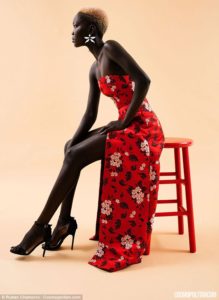 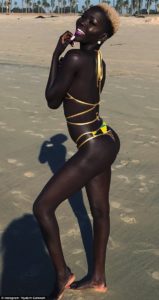 ‘I would cry myself to sleep’: Sudanese model, 24, reveals how she was cruelly bullied by classmates who told her she was ‘too black’, after fleeing her home as a child to start a new life in the US

・Nyakim Gatwech, who is now based in Minnesota, revealed in March an Uber driver had asked her whether she would bleach her skin for $10,000

・The model, who has 325,000 followers on Instagram, has become an advocate for self-acceptance and against discrimination based on skin color

・In a new interview, she revealed how her classmates ruthlessly bullied her because they found her complexion too dark

・Some said they couldn’t see her, others would taunt her by telling her she needed to take more showers; as a teen, Gatwech would cry herself to sleep

・But now, the model says negative comments don’t affect her as much, and she sometimes manages to laugh at them

an advocate for women’s sports

He’s a strong advocate of state ownership of the railways.

He advocates the return of capital punishment.

Some people advocate teaching to the test.

The organization advocates for human rights.

Cambridge Dictionaryによると形容詞ruthlessは ” not thinking or worrying about any pain caused to others; cruel: “というふうに記載されていますね。その副詞です。

She ruthlessly pursued her ambition, letting nothing get in her way.

Some people believe that to succeed in this world you have to be ruthless.

She showed a ruthless determination to succeed in her career.

Macmillan Dictionaryによると” the appearance of the skin on someone’s face, and whether it is pale, dark, smooth etc “ と記載されていますね。

Cambridge Dictionaryによると” to intentionally annoy and upset someone by making unkind remarks to them, laughing unkindly, etc.: “ と記載されていますね。

The other kids used to taunt him in the playground because he was fat and wore glasses.

The movie is about a criminal who taunts the police with phone calls.

cry yourself to sleep

A stunning Sudanese model who became a fashion icon after moving to the US from a refugee camp has detailed the cruel bullying she faced growing up, at the hand of classmates who thought her skin was ‘too black’.

Nyakim Gatwech, based in Minnesota, revealed in March this year that an Uber driver had once asked her whether she would bleach her skin if she were given $10,000 in exchange.

The anecdote resonated with her social media followers—she now has 325,000 on Instagram—and Gatwech, 24, has become a vocal advocate for self-acceptance, who often speaks out against discrimination based on skin color.

at the hands of (phrase)

How many people have died at the hands of terrorist organizations?

They suffered defeat at the hands of the French.

Macmillan Dictionaryによると” if you give someone something in exchange for something else, you give them something and they give you something else of a similar type or value “というふうに記載されていますね。

They were given food and shelter in exchange for work.

I might offer them my old camera in part exchange for a new one.

Joe kept us entertained with anecdotes about his friends.

He told one or two amusing anecdotes about his years as a policeman.

He told some funny anecdotes about famous people.

To resonate with (verb)

Cambridge Dictionaryによると” If an experience or memory resonates, it makes you think of another similar one: “ と記載されています。

Her experiences resonate powerfully with me, living, as I do, in a similar family situation.

This issue has resonated with voters more than any other.

Before Gatwech moved to the US aged 14, she lived in two different refugee camps in Ethiopia and Kenya, after her family had to flee war-torn Sudan.

‘My mother fled before I was even born, because there was a war. Soldiers would come and shoot the whole village, machine gun everybody down,’ she told Cosmopolitan in a new interview.

‘She had to make her way with her children on foot to Ethiopia, and she lost my older sister — she passed away along the way. We were there until the UN left that camp. After that, we moved to a refugee camp in Kenya, where finally we were accepted into the United States.’

The model expected America to be ‘like heaven’, after sleeping in the refugee camp’s tents and not having safe access to food and water, but faced ruthless bullying as she settled into her new country.

It is a long-term task to rebuild the infrastructure of a war-torn country such as Angola.

Macmillan Dictionaryによると ” to become familiar with a new way of life, place, or job, or to make someone do this “ というふうに記載されていますね。

How are you settling into your new home?

After moving frequently during his first 14 years, he settled into a normal high school life.

We settled into our tent.

Students settled into their desks and took out their notebooks.

Recounting her classmates’ taunt, she said:  ‘They would say, you know, I’m too black, my skin is too dark. They’d be like, “You don’t take showers. That’s why your skin is dirt.” Or, “Smile so we can see you, Nyakim. We can’t see you.”

‘And then, in class, for example, the teacher would ask a question and say, “Oh, Nyakim, can you answer that?” A kid would say, “Who are you talking to? We can’t see her. She’s not here.” The whole class would start laughing, and I would just cry.’

The teenager, who was in the process of learning English, also struggled with the language barrier. She kept to herself and thought she would never make it as a model, because she didn’t look like other people in magazines, on television, or online.

When her family moved to Minnesota the following year, the comments regarding her skin color continued.

‘I‘d walk into the grocery store, and people would stare at me. I could hear people saying under their breath, “Oh my God, she’s so black. Is that even normal?” ‘ she said.

In an attempt to make friends Gatwech joined a track and field team, but ended up quitting after her teammates wondered out loud whether they would be able to see her clearly enough to give her the relay stick.

The bullying took such a toll on the future model that she considered bleaching her skin, but her sister, who went through the treatment herself, talked her out of it.

Cambridge Dictionaryによると” to describe how something happened, or to tell a story: “ と記載されています。

He was fond of recounting how he had played professional football when he was 19.

She recounted some of her experiences working as a nurse in a hospital emergency room.

keep to yourself (phrase)

I was very shy and pretty much kept to myself in school.

They were a quiet couple who kept themselves to themselves.

under your breath (phrase)

Cambridge Dictionaryによると” if you say something under your breath, you say it in a very quiet way so that it is difficult for people to hear “ と記載されていますね。

He muttered something under his breath.

“Let’s go,” she muttered under her breath.

Cambridge Dictionaryによると” the general name for a particular group of sports in which people compete, including running, jumping, and throwing: “ という風に記載されています。陸上競技のことです。

The team had no chance of striking gold in track and field.

Macmillan Dictionaryによると” in a way that other people can hear “ というふうに記載されていますね。

Each child reads out loud.

I had to read the essay out loud in front of the whole school.

The constant stress takes its toll on emergency room workers.

The recession has taken a heavy toll.

talk someone into/out of (phrasal verb)

I talked her into going to London with me.

His father talked him out of moving out.

I talked him out of running on his sore ankle.

Now, Gatwech finds ignorant remarks easier to handle. When the Uber driver asked her whether she’d bleach her skin for ten grand, she laughed and asked him why he thought she ought to change her appearance.

The driver was convinced the model would have an easier time landing jobs and finding a partner if her skin was lighter, to which Gatwech replied: ‘[Even if] being lighter would make my life easier, I’d rather take the [hard] road.’

‘The negative reactions or comments don’t affect me as much now—some of them I laugh at. But there are some that go deep and bring me down for a little bit,’ she added in her latest interview.

‘Some people say I get followers because people feel bad for me, not because I’m actually beautiful. They say I’m the dumbest person ever. But there are millions more people who think I’m beautiful and give me positive feedback.’

The model has also inspired others to love themselves, including a young girl who told her she is now proud to be ‘the darkest girl in the room’.

‘I never imagined that somebody would feel like they’ve accepted who they are and love who they are because of something I did,’ Gatwech said. ‘That’s my main goal, if loving myself and talking about it is helping people, I want to keep doing that. That’s important.’

I’m convinced (that) she is lying.

My boyfriend says I’d like going on a camping trip, but I’m not convinced.

I am not completely convinced he understood the gravity of the situation.

Despite all my father’s arguments, I still wasn’t convinced.